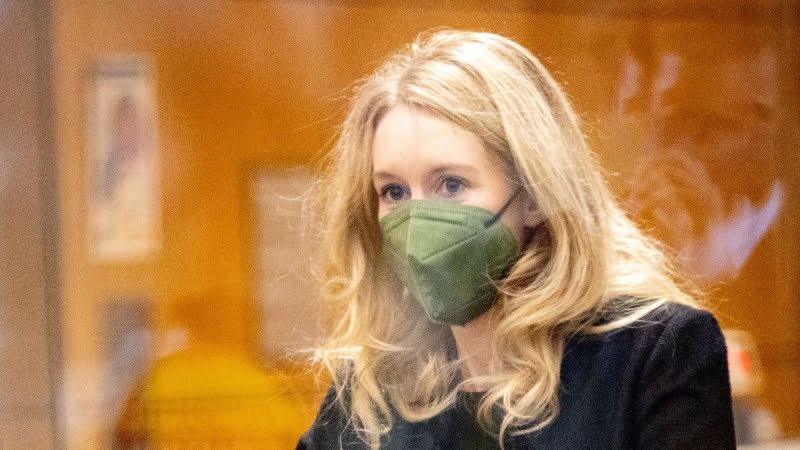 Holmes confesses to a passion for graphic design

Who added the Schering-Plough and Pfizer logos to the Theranos-produced lab reports that investors received? Why, none other than Elizabeth Holmes.

“This work was done in partnership with those companies and I was trying to convey that,” she said on the stand today. She added the logos before sending the memos to Walgreens, which Theranos would later partner with. Holmes wasn’t trying to fool anyone, she said. “I wish I’d done it differently.”

“I wish I’d done it differently.”

Holmes spoke slowly as she confessed. The testimony, given on her third day of questioning by her defense team, sounded polished. Rehearsed. It was the most confident she’d sound all day.

Those documents have been a major part of the case against Holmes in her trial for wire fraud. Investors testified that they thought the documents had been generated by the pharma companies themselves. And Holmes’ mea culpa didn’t explain why the language in the Schering-Plough memo had changed from “give accurate and precise results” in the version the drug company saw to “give more accurate and precise results… than current ‘gold standard’ reference methods” in the Walgreens version.

But maybe the confession was meant to make it sound more serious when Holmes spent other parts of her testimony passing the buck.

Holmes said that lab director Adam Rosendorff, VP Daniel Young, and Balwani, her CFO, were responsible for the clinical lab — implying that whatever problems happened there weren’t her fault. And, maybe, that she wasn’t completely aware of those problems. As she discussed conditions in the lab, her speech sped up and she appeared nervous. She said she hadn’t pressured Rosendorff to approve tests. Hadn’t pressured Young, either. Hadn’t pressured anyone to sign off on a lab report they didn’t want to sign.

Whatever had gone on in the lab, well, that wasn’t her.

When Rosendorff raised concerns about the schedule for tests, “I recall telling Dr. Rosendorff that we’ll do whatever it takes to give him the time he needs to bring up the tests properly,” Holmes said. Those tests were delayed by months.

“This was the wrong way to treat people.”

What about scientist Surekha Gangakhedkar, another employee who feared getting blamed for Theranos’ problems? Well, gee, Holmes had no idea Gangakhedkar had reservations about Theranos’s tests. (Holmes did not directly address Gangakhedkar’s testimony that Holmes had pressured her to approve tests.) When the scientist resigned, she cited stress and health issues. Stress, incidentally, can cause health issues.

Holmes tried to convince Gangakhedkar to take a leave of absence, but the scientist quit. And we saw one reason why Gangakhedkar was so stressed: an email from Balwani (on which Holmes was copied!) scolding her for not working hard enough. “Please note the software team was here til 3:07AM — and is already here now at 10AM,” he wrote.

Holmes said she wished she’d handled this differently. “This was the wrong way to treat people.”

The rotten working environment at Theranos was a consistent theme among employees who testified in the trial. Entry-level employee Erika Cheung testified that people slept in their cars as they tried to address problems with quality control on Theranos tests. On the day Gangakhedkar quit, another member of her team also quit, also citing stress. A human resources employee emailed Holmes about it: “Surekha just came by and said she believes Tina is resigning because of health reasons, family life and stress,” that email said. “She said it is similar to the reasons she is resigning.”

As for Theranos’ marketing, which the prosecution argued deceived people about Theranos’s technology, that was the doing of Chiat Day, the firm that famously did the Apple “1984” ad, Holmes said. The images that conveyed Theranos’ message — like the image of the cute kid captioned with “Goodbye Big Bad Needle” — were symbols that Chiat Day told them to adopt for their brand identity. Images were especially important for conveying identity, the firm told Holmes.

Holmes said she reviewed the article before publication

But Holmes admits that she wasn’t hands-off with shaping Theranos’ image. Theranos hired a PR group, Grow Marketing, and managed to place a story in The Wall Street Journal’s opinion section, written by Joseph Rago, about how amazing Theranos was, titled: “Elizabeth Holmes: The Breakthrough of Instant Diagnosis.”

In the article, which Holmes said she reviewed before publication, Rago wrote that “Theranos’s processes are faster, cheaper and more accurate than the conventional methods and require only microscopic blood volumes, not vial after vial of the stuff.” This article was part of the marketing materials that investors received, convincing them to invest in Theranos.

That was part of the press strategy — to introduce Theranos before announcing its partnership with Walgreens. You know, the one that had gotten Holmes to send the be-logoed reports. We saw emails Holmes wrote about the roll-out strategy. At the end of 2013, Theranos agreed to open its testing locations in 3,000 stores over the next two years.

Former Walgreens senior executive Nimesh Jhaveri testified earlier in the trial that the roll-out had been slowed because so many tests had been done on venous draws, instead of the fingersticks Theranos had promised.

According to Holmes, the roll-out was going well in early 2014. By the end of the year, only 40 service centers had opened. But see, that wasn’t Holmes’ fault, because Walgreens had made an acquisition (of Boots, another pharmacy) and all the Walgreens execs had been replaced by Boots execs.

As for the wonky financial projections that had convinced investors that Theranos was more profitable than it actually was, well, those models were Balwani’s and he prepared the projections she used. Looking at the projected revenue in 2014 ($140 million) and 2015 ($990 million), Balwani “built a model with a number of assumptions about how many stores Theranos would roll out to and other work with physicians and hospital systems sending us samples” and that was how he made projections, Holmes said.

Balwani was the primary contact for investor Daniel Grossman of PFM Management, Holmes said. Grossman previously testified that Holmes lied to him about Theranos’ capabilities, and that in meetings where both Holmes and Balwani attended, Holmes did most of the talking.

As for Theranos’ failed attempt to open stores in Safeway, part of that was executive changeover. Former Safeway CEO Steven Burd had testified that Theranos’ frequent delays troubled him, but Holmes never told him there was a problem with Theranos’ tech. He retired; when new management came in, Balwani dealt with them.

The defense announced its strategy on the very first day: pass the buck. The gamble appeared to be that having Holmes admit her culpability in the doctored memos would give her more credibility when she blamed other people for almost everything else. But the difference between Holmes’ demeanor when she admitted her role in the memos and when she spent time blaming others was striking. As she deflected responsibility, for the first time in the trial, she looked nervous.

Myanmar says alleged plot against UN envoy was nothing to do...