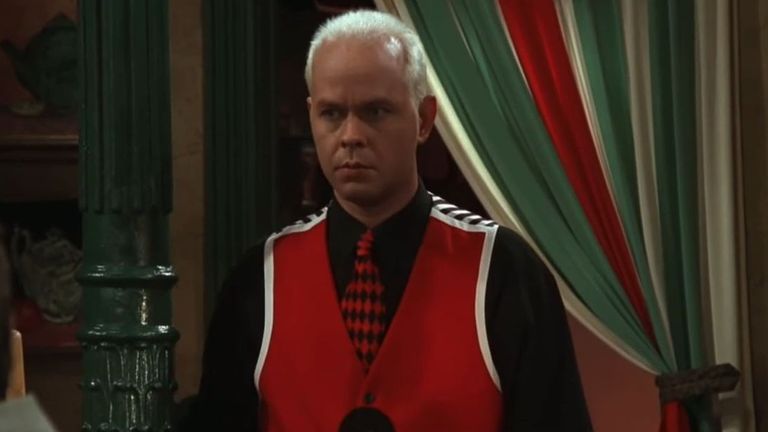 James Michael Tyler, best known for playing Gunther in Friends, has died at the age of 59.

Jennifer Aniston led the tributes to the actor, thanking him for the laughter he “brought to the show and to all of our lives” and saying Friends “would not have been the same” without him.

Tyler died peacefully at his home in Los Angeles on Sunday morning, a statement from his manager said. He had been diagnosed with advanced prostate cancer in 2018, which later spread to his bones.

Actor James Michael Tyler (@slate_michael) played Gunther on “Friends” for 10 years, but he was unable to attend the recent cast reunion in person because he’s been battling a serious health issue. Now he’s sharing his news for the first time with @craigmelvin. pic.twitter.com/272tg4Sbvc

“Warner Bros. Television mourns the loss of James Michael Tyler, a beloved actor and integral part of our FRIENDS family,” a post on the official Friends Twitter account said. “Our thoughts are with his family, friends, colleagues and fans.”

“James Michael Tyler, we will miss you. Thank you for being there for us all,” Kudrow wrote on Instagram, while LeBlanc said: “We had a lot of laughs buddy. You will be missed. RIP my friend.”

Warner Bros. Television mourns the loss of James Michael Tyler, a beloved actor and integral part of our FRIENDS family. Our thoughts are with his family, friends, colleagues and fans. ❤️☕️ pic.twitter.com/9coGnT5BHz

“I was diagnosed with advanced prostate cancer, which had spread to my bones,” he told the programme at the time.

“I’ve been dealing with that diagnosis for almost the past three years. It’s stage 4 (now). Late stage cancer. So eventually, you know, it’s gonna probably get me.”

Tyler said he underwent hormone therapy at first, which “worked amazingly for about a year”, allowing him to live normally on just three pills a day.

But following a missed test, his cancer spread to his bones, leaving his lower body paralysed.

He is survived by his wife, Jennifer Carno.