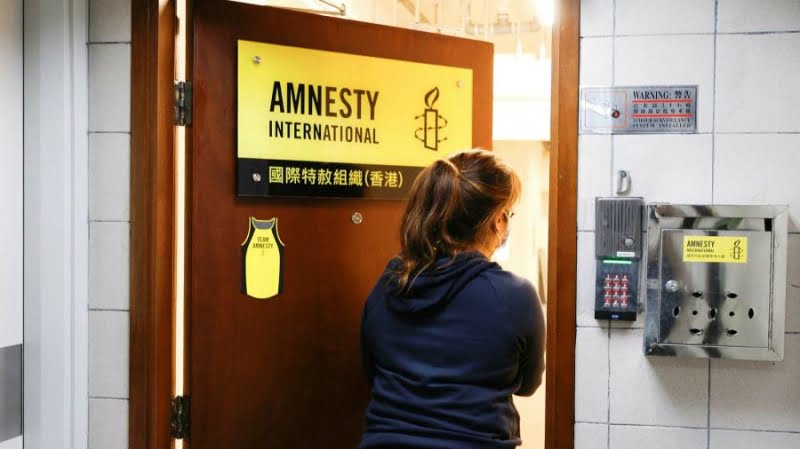 Human rights group Amnesty International is closing its Hong Kong offices after nearly 40 years in the city amid concerns for its staff as Beijing cracks down on civil liberties.

China’s imposition of a national security law in Hong Kong in the wake of the 2019 pro-democracy protests has led to mass arrests of opposition politicians and a crushing of dissent.

Amnesty will become one of the first major international non-governmental organizations to withdraw from Hong Kong since the security law was announced when it closed its two offices in the city at the end of the year.

The move follows the shutdown of more than 35 local civil society groups who said they could not continue operations in light of threats from law enforcement and pro-Beijing groups.

Hong Kong National Security Law. . . it has effectively made it impossible for human rights organizations in Hong Kong to work freely and without fear of serious reprisals from the government, ”Anjhula Mya Singh Bais, chairman of Amnesty’s international board, said on Monday.

The law, which targets secession, subversion, terrorism and collusion with foreign forces, was introduced in June 2020 as part of a broader attempt by Beijing to reshape the free city and align it with mainland China. Violators under the law face a maximum penalty of life in prison.

In response to Amnesty’s decision to leave Hong Kong, the government said that freedom of association was protected by security law. “Any claim that freedoms have been eroded due to the. . . Safety laws are far from the truth. “

In recent months, the police have indicted members of Hong Kong NGOs using security laws, including the leaders of the group that organized the annual memorial to the 1989 Tiananmen massacre that took place in Victoria Park.

State-backed newspapers and pro-Beijing politicians have also campaigned against all kinds of civil society groups, including arts organizations, accusing them of breaking the law.

Hong Kong was previously a regional base for many global NGOs and media companies. Last year, the New York Times said it would move its Asia headquarters to Seoul, South Korea.

Amnesty Hong Kong’s office that managed local membership will close this weekend, while the other that oversaw its Asian investigation into areas such as China’s crackdown on human rights lawyers will close by the end of the year. The organization did not say where its new Asia office would be located.

“The environment of repression and perpetual uncertainty created by the national security law makes it impossible to know what activities can lead to criminal sanctions,” Bais said.

On Monday, Ma Chun-man, a 31-year-old former food delivery worker, was convicted under security law of “inciting secession” for chanting slogans during protests in late 2020 that the court said were ” in favor of independence “.

The judge said Ma had “every intention of inciting others to follow his ideas.” Ma faces up to seven years in jail and will be sentenced on November 11.