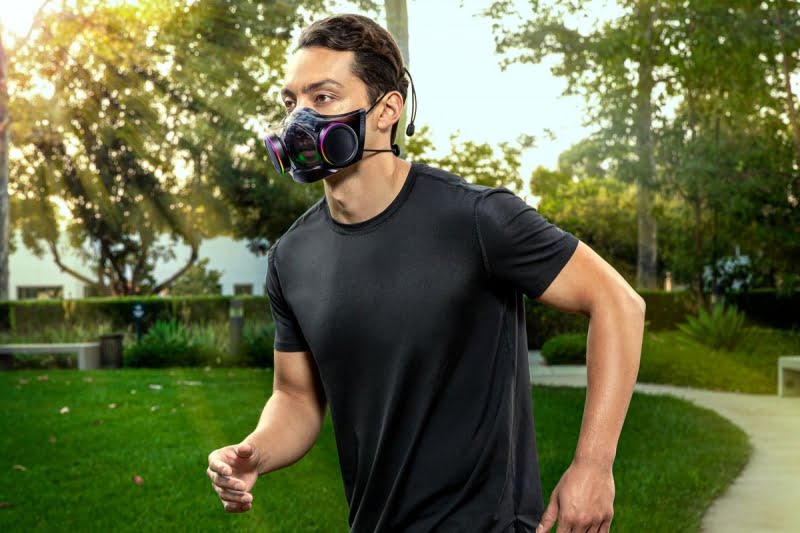 The Zephyr is apparently light enough to accompany you on a jog, assuming you want some extra attention.

Razer’s Zephyr face mask is available to the public after several months of tweaking features and beta testing with Razer super fans. You can purchase it starting tonight at 11PM ET / 8PM PT from Razer.com in two configurations. The most basic kit for $99.99 includes the mask, a carrying tote, a USB-C charging cable, anti-fog spray, and three sets of replaceable N95 filters that will cover you for nine days of use. If you want more filters included with your purchase, a $149.99 version includes everything mentioned above, plus 33 sets of filters for 99 days of filtered use. You can purchase filters by themselves in sets of 10 for $29.99, which will get you 30 days of use.

The Zephyr is a completely different kind of product for Razer and could be one of its most important yet. The brand is known mostly for its gaming accessories and PC components that serve to entertain, but the Zephyr mask is aimed at keeping people healthier (while no less lit up with RGB LEDs). It made for a slightly perplexing — but nevertheless big — reception for CES 2021 since the company has historically shown off gaming-related concepts like a three-screened laptop, a gorgeous, modular desktop concept, and more. 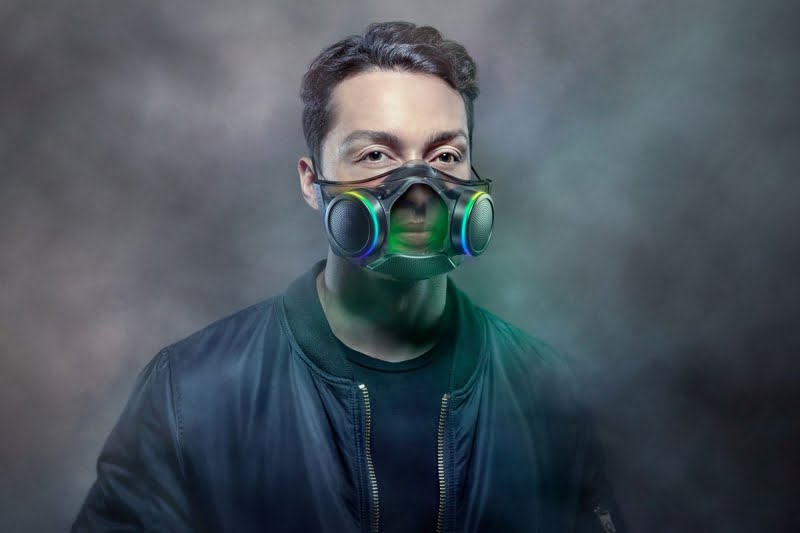 Razer says that if you spend a prolonged period of time in a higher-risk setting, like an indoor location, change the Zephyr’s filters as soon as possible.

Some saw the Zephyr’s announcement in January as a play to capitalize on a global crisis. It didn’t help Razer’s case that it didn’t initially have any certification to prove that the mask would be safe to use in a pandemic — and it still doesn’t. The mask is FDA-registered, which basically means that the FDA is aware that this product exists, not that the agency is backing the Zephyr’s effectiveness. Razer says it isn’t a medical device or personal protective equipment (PPE), and it hasn’t been specifically tested against COVID-19. The company hasn’t shared whether it’s seeking further approval. It’s being marketed now as an air purifier.

It says its filters are N95-grade and have 99 percent BFE (bacteria filtration efficiency). It claims that the mask can filter 99 percent of air particles that are 0.3 microns in size. Notably, the company says that it offers this level of protection for air that you breathe in, as well as for air that you breathe out. As for whether that means it can block COVID-19 particles, the answer is a little complicated. The virus particles are smaller than 0.3 microns, but that post linked from USA Today says they usually bond to much larger molecules, like water.

To install the filters, you simply remove the magnetically attached caps of the two air valves and slot in a filter with the black section facing the mask. There’s one more filter that gets inserted underneath the see-through plastic window. Each set of N95-grade filters can be used for up to 72 hours before they’re no longer effective at filtration. Razer says that if you spend a prolonged period of time in a high-risk environment, such as an indoor location, you should replace the filters as soon as possible. 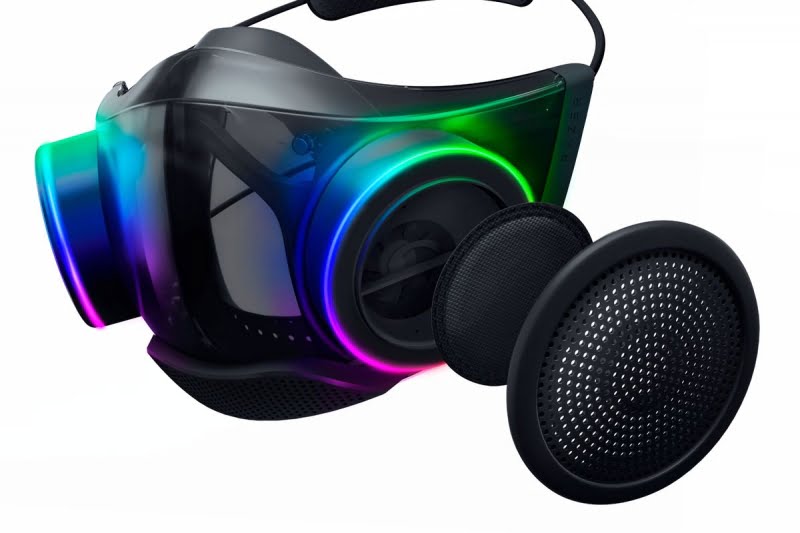 The two circular N95-grade filters fit between the Zephyr’s fans and their magnetic caps. There’s another filter to change just beneath the see-through plastic window.

The Zephyr has style and features not usually seen with your average face mask. It looks like a futuristic gas mask, with Razer’s Chroma RGB lining the edges of the air intake and exhausts where you’ll install the N95 filters. The LEDs are mostly for show, but they’re also being touted as an accessibility feature since they, working in tandem with its see-through window covering the mouth, could theoretically make it possible to lip-read and to catch more non-verbal cues that masks can cover up.

For those who feel like they aren’t getting enough air flow, the Zephyr feature fans near the filters that are intended to make it easier to breathe. A button on the mask can turn on the fans and toggle between two speeds: 4200 and 6200 revolutions per minute. There’s a third air chamber located near the bottom of the mouth area, but it’s passive and doesn’t feature a fan.

The Zephyr has a dual strap design that it says can fit all head sizes, with one strap fitting around your neck and a strap with a fastening mechanism that secures around the back of your head. Both straps, as well as the pieces that touch your nose and chin on the front, feature silicone. The silicone components that touch your face can be removed for easy cleaning. Though, Razer warns against wiping the inner side of the plastic window, as it could mess up the anti-fog coating that makes it easier to see your mouth. 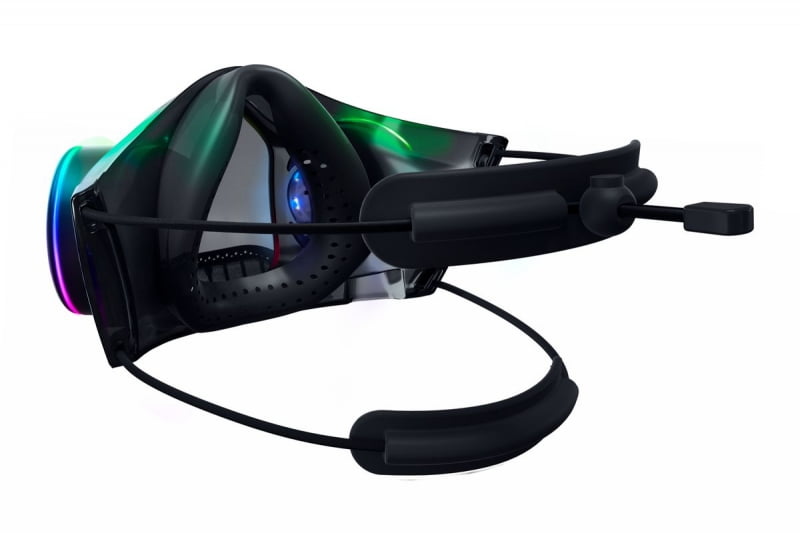 Razer initially promised to install amplifiers and speakers in the Zephyr to give your voice a boost, but unfortunately, that feature didn’t make it into this first-gen product. According to Razer, it said that eliminating the feature allowed the Zephyr to shed some weight, add bigger air valves, and for its battery to last longer. However, it doesn’t rule out that the feature may appear in future iterations of the Zephyr. This was disappointing news to people like my partner, who is a teacher. The idea of not having to scream through a mask all day seemed, to her, like a killer app.

The Zephyr can be operated entirely by its built-in buttons, but it also supports Bluetooth connectivity to control its RGB lights via the Zephyr app for Android and iOS. Its built-in battery is supposed to last up to eight hours per charge, but that’s if you aren’t using any RGB lights and have the fans set to their lowest setting.

Many people — myself included — appreciate the anonymity provided by normal face masks, so the idea of wearing the Zephyr every day seems like an attention-grabbing exercise that I wouldn’t enjoy. Not to mention that owning the Zephyr is costly out of the gate and will get even more expensive as you need to buy more filters.

We’ll be covering the Zephyr more soon, but even sooner, Verge health tech reporter Nicole Wetsman and I will take the stage at On The Verge on October 23rd to demo the Zephyr and ask Razer a bunch of questions.

Have any questions about the mask? Let us know in the comments below.

How Elizabeth Holmes sidelined the real scientists at Theranos