Emily Horgan, an independent media analyst, returns to walk us through all the big news from Netflix’s Q3 earnings call specifically as it pertains to Netflix’s kid’s strategy. If you missed the Q2 2021 roundup, check that out before diving into these insights into Netflix’s Q3.

Netflix Q3 2021 Earnings went ahead this week as usual.  Before we dive into kids’ content notes it’s worth mentioning that this was against a backdrop of escalating headlines at the company. David Chapelle’s most recent stand-up show, The Closer, landed on the service, attracting significant condemnation. Critics, including employees, have said that the show promotes bigotry against transgender people. There was no discussion regarding this on the call, which is not surprising given these typically focus on investor metrics like financials and subscriptions.

On the topic of subscriptions, the service is now up to 214m paid memberships, driven mainly by increases in EMEA and APAC.  Growth in UCAN and LATAM were deemed softer.  Production delays from COVID are all caught up, so, further lockdowns aside, expectations on a fuller content slate should continue including the “strongest Q4 content offering yet”.  A wealth of kids’ content has dropped on the service over the past few weeks of the back-to-school period: Oggy Oggy (Aug 24th), I Heart Arlo (Aug 27th), Sharkdog (Sep 3rd), My Little Pony: A New Generation (Sep 24th), Ada Twist, Scientist (Sep 28th), Karma’s World (Oct 15th), with Maya and the Three coming on Friday, Oct 22nd.

The big news is that Netflix is shifting the way they report on content success, with a promise to release numbers more often.  The core measurement will move from “number of accounts who watched” to “number of hours viewed”.  It’s a similar approach to how Nielsen in the US publicly report on SVOD.  A recent appearance by Ted Sarandos at Code Con foreshadowed this, where he unveiled the Top 10 shows by both metrics across series and film, see below.  It’s a timely change, with Netflix, as the dominant SVOD in the marketplace, being able to influence the yardstick that others will be judged by.  Numbers under this metric will have a tendency to be significantly skewed by content length, episode volume, and even genre. 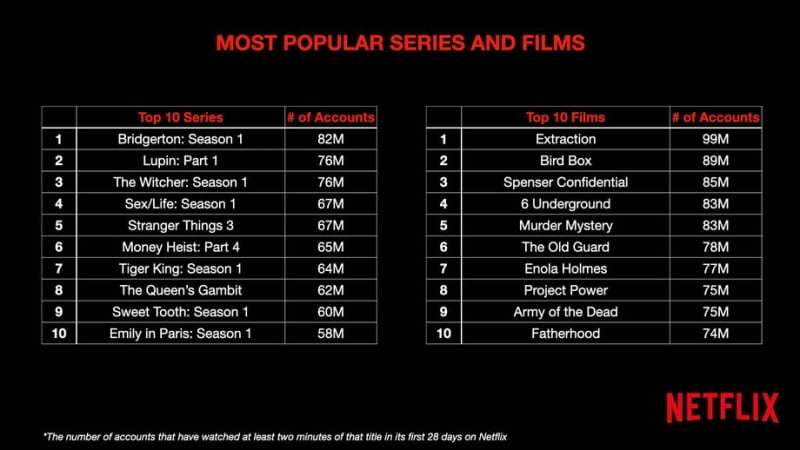 Unfortunately, no kids’ content made these Top 10s.  Judging by cut-through in US Nielsen SVOD results, however, there is potential that this metric will show some favourability for younger-skewing content due to the major repeatability factor.  One unfortunate side effect, however, is that it will render all previously released statistics totally incomparable. A cry for both to continue in parallel, as indicators of both reach and engagement, is likely to fall on deaf ears.  This is a shame for anyone who’s building a kids’ brand or franchise.

All that being said, the “members viewed” metric was determined to go out with a bang. South Korean phenomenon, Squid Game, has landed as the most successful Netflix Original to date by a country mile. 142m members viewed the show, 57% more than the next most successful series. Who could have guessed that a humble local production could so thoroughly dethrone hitmaker, Shonda Rhymes’ Bridgerton?  Also, what relevance does a violent, high anxiety, survival drama have in an article about kids’ content? Well aside from the playground games that facilitate the method of death selection, the series also has an astounding footprint in the gaming platform Roblox, where around half of the 43million daily users are under 13.

Gaming more broadly remained a hot topic, particularly given Netflix’s recent acquisition of Night School Studio. They continue to position this as a longer-term vertical that will need to be built out at the slow steady pace they’ve had with content genres. They very much see the proposition being built into the service.

The Roald Dahl Acquisition and Kids

Their other major recent acquisition of The Roald Dahl Story Company was also front and center. The “enduring staying power” of Dahl’s characters for both kids and parents was mentioned, alongside the good track record the IP has had in feature films.  Overall, there is a lot of interest to make high-end, feature-quality content from these stories, from both in-house teams and retained talent. The hope is that success in this regard would spill out into consumer products and gaming also. Projects currently announced include two Willy Wonka spin-offs coming from Oscar winner Taika Waititi.

Ted Sarandos also spoke in detail about the kids’ content vertical. When asked about the success he said with fair humility, “It’s still a long time out… we’ve got this one part of the business that it’s going to take a little bit longer to prove itself”. I suppose when Disney is your benchmark, delivering kids’ content is going to feel like an uphill struggle.

Interestingly, he went on to say that he doesn’t believe an “enormous machine” is necessary to create brand loyalty around kids’ characters.   This ran contrary to later comments about consumer products being “a great way to enhance the relationship with content and fans”.  Perhaps “the machine” is a reference to a need or otherwise for theatrical releases on kids’ films.  Many high-end animated features have gone straight to streaming in the past year across both Netflix and Disney+, the latter pumping out Pixar films Soul and Luca direct to subscribers without any premium payments.  What’s true is that Netflix does have a convincing array of kids’ storytellers on their payroll, with plenty in the pipeline to be excited about.

That leads us nicely to content performance this quarter.  Vivo, produced by Sony Pictures Animation, featuring Lin Manuel Miranda as music and voice talent, is Netflix’s second-biggest animated feature to date.   It beat out in-house animated Original Over the Moon with 46m households tuning in.  Overall ranking for kids’ content “datecdotes” is below:

On teen/kid adjacent content we had a few more details. Gender swapped derivative He’s All That featured TikTok star, Addison Rae. Performance across 55m households was obviously enough to convince Netflix to sign a multi-film deal with her. The third and final installment of The Kissing Booth series had 59m households watch.  Teen content was anecdotally referred to regarding the overall increased viewing per member of the service. Here’s how the ranking for kids including teen films looks: 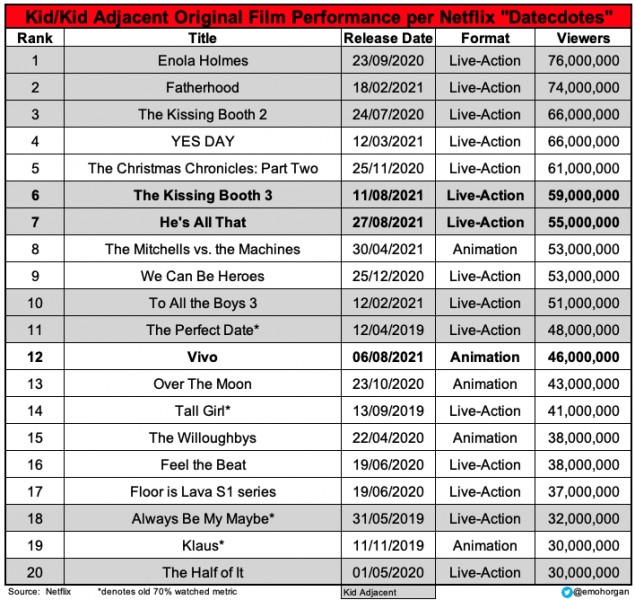 As we move into Q4, it feels that a lot of high-quality kids’ content has been pushed through in recent weeks as mentioned above.  Chris Nee’s Ridley Jones, which we’re yet to see any concrete performance data on, will see a second season on November 2nd. Then we’re into the lead-up to Christmas with family films and specials landing. These include Robin Robin from Aardman, The Princess Switch 3 featuring Vanessa Hudgens, and the next true Netflix Original animated feature Back to the Outback.

ERICA SULLIVAN EXPLAINS LET DOWN OF US TRIALS, FULFILLMENT OF OLYMPIC...