Home POLITICS Labour conference 2021: Sir Keir Starmer to tell members that under his... 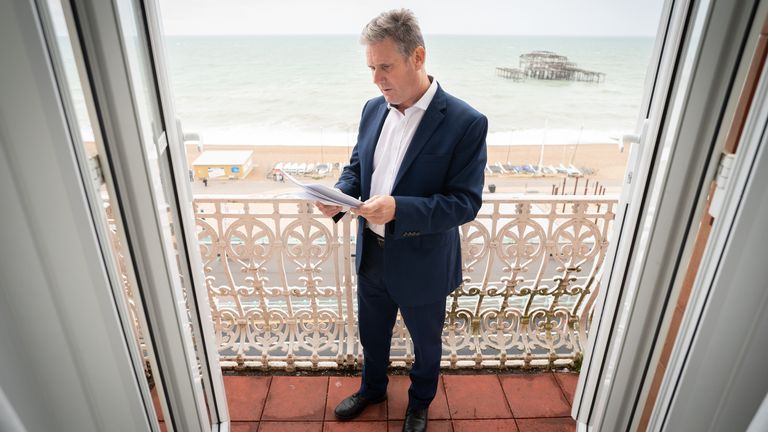 Image: Sir Keir Starmer will address Labour delegates on Wednesday for the first time since becoming leader of his party in 2020

The leader’s keynote speech at Labour’s party conference on Wednesday will be his first in-person address to members since being appointed to the role last year.

Sir Keir Starmer will tell Labour members on Wednesday that under his leadership, the party will be “back in business”.

In his keynote speech at midday, marking the end of the party’s five-day conference in Brighton, Sir Keir will say that with him at the helm, Labour is committed to both “the good society” and “a strong economy” as the country recovers from the coronavirus pandemic.

The Labour leader will use the opportunity to present himself as both a serious alternative to Boris Johnson and vastly different from former party leader Jeremy Corbyn, who led Labour to a heavy election defeat in 2019. 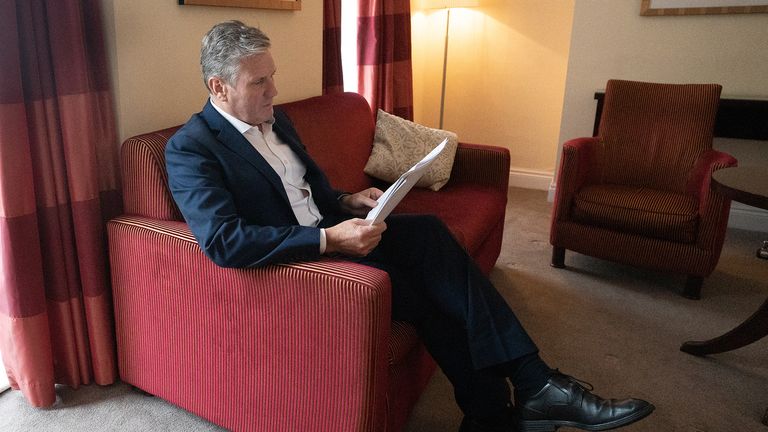 A Labour source said their party leader’s speech, his first in-person conference address since taking up the position last year due to COVID-19 restrictions, will be “noticeably different from what you’ve heard from Labour in recent years”.

“The speech will be a demonstration of the way the Labour Party has changed. It will be a clear indication that Labour will never again go into an election with a manifesto that isn’t a serious plan for government,” they added.

It was also noted that Mr Corbyn will not be mentioned in the address.

It is expected that Sir Keir will use his speech, which is being tipped as the most important in his political career, to declare who he is, more about his background and how this and his values inform the politician he has become.

It comes after a turbulent few days for the Labour leader following Andy McDonald’s dramatic resignation from his shadow cabinet on Monday.

In a letter to Sir Keir, Mr McDonald, who had been shadow secretary of state for employment rights and protections, said his position as a member of the Labour leader’s top team had become “untenable”. 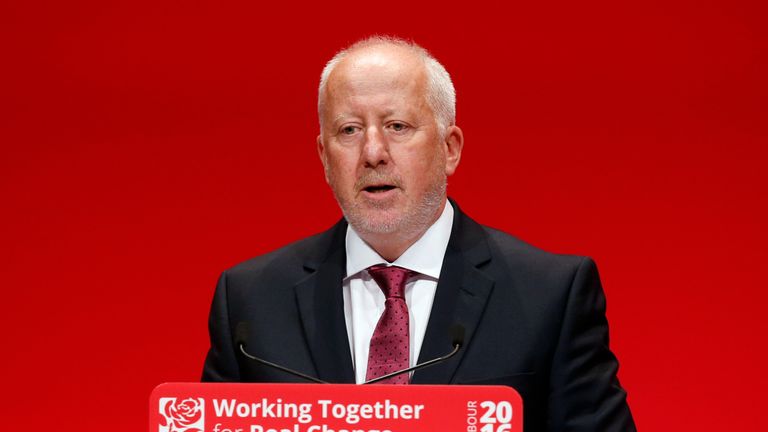 A member of former party leader Mr Corbyn’s shadow cabinet and left-wing ally of Sir Keir’s predecessor, Mr McDonald claimed he had been told by Sir Keir’s office on Sunday to go into a meeting “to argue against a national minimum wage of £15 an hour and against statutory sick pay at the living wage” – which he said was something “I could not do”.

On Tuesday, Labour members backed a motion committing to the £15 minimum wage.

And later that evening, Mr McDonald posted on social media: “My message to Keir Starmer is that he must return to the ten pledges on which he was elected to the leadership by Labour members. If he fails to do so, he should go back to the membership to seek another democratic mandate as a matter of integrity.”

The conference also saw a bust-up with unions and the party’s left over internal rule changes.

While there have been no signs yet of a formal leadership challenge, a number of figures on the Labour left have called on Starmer to go back to members to test whether they still back his leadership.

My message to Keir Starmer is that he must return to the ten pledges on which he was elected to the leadership by Labour members. If he fails to do so, he should go back to the membership to seek another democratic mandate as a matter of integrity.https://t.co/IWf5YsyR94

Last week, former shadow chancellor John McDonnell told Sky News: “If he (Keir) wants to plough ahead, in all honesty he should go back to the people who elected him in the first place.”

But in a more positive moment during the Labour leader’s first in-person conference in the role, former MP Dame Louise Ellman rejoined the party nearly two years after quitting over antisemitism.

In another letter on Monday, the 75-year-old, who served as MP for Liverpool Riverside between 1997 and 2019, said Sir Keir was a Labour leader in whom British Jews can “once again” have trust.

It’s high noon for Sir Keir Starmer as he makes what his critics claim is a make-or-break speech for his leadership at midday.

When John Major was prime minister, it was cruelly claimed by some Tory MPs that the Conservative conference built up to one big anti-climax.

The danger for the Labour leader is that his speech here in Brighton – widely anticipated by friends and foes alike – will turn out to be an anti-climax.

Even his own supporters are crying out for some passion from Sir Keir. But so far there’s little evidence that the Labour leader can do passion.

Although this is his first big speech in front of a live audience, it’s claimed his speeches so far in his first 18 months as leader have been too cautious, risk-averse and lacking in flair or the ability to inspire the party faithful.

As well as setting out his vision and some new policies and talking about the need to win the next election, we’re told it’s going to be a deeply personal speech.

That means we’ll probably get the story about his father Rodney the toolmaker that he told in his speech to the TUC two weeks ago.

“He worked on the factory floor all his life, going to work at eight in the morning, home for tea at five, back to work six till 10 o’clock at night five days a week,” he said as he attempted to woo the unions.

It has been claimed, however, that Rodney Starmer was in fact not an employee but self-employed and run his own business.

Make or break? A bad speech probably won’t break Sir Keir but a good one could help to make him. No pressure, then.

In his keynote speech, Sir Keir is likely to reflect on the positives of the Labour conference 2021 and set out his plan for how a Labour government would lead the country’s recovery from the pandemic.

It is expected that the address, which Sir Keir began writing during a holiday in Dorset over the summer, will seek to show that the government’s reaction to the pandemic is a failure to meet the scale of the challenge – and that the public is waking up to this fact.

The Labour leader will set out how the government is “lost in the woods with two paths beckoning” – one “leads back where we came from”, while the other addresses the problems revealed by COVID “with the kindness and the togetherness that got us through”.

“Too often in the history of this party our dream of the good society falls foul of the belief that we will not run a strong economy,” Sir Keir will say.

The Labour leader will also outline how Britain faces “big” questions including how the country emerges from the pandemic, the climate crisis, our relationship with the EU and the future of the union.

“These are big issues, but our politics is so small, so our politics needs to grow to meet the scale of the challenge,” Sir Keir will say. 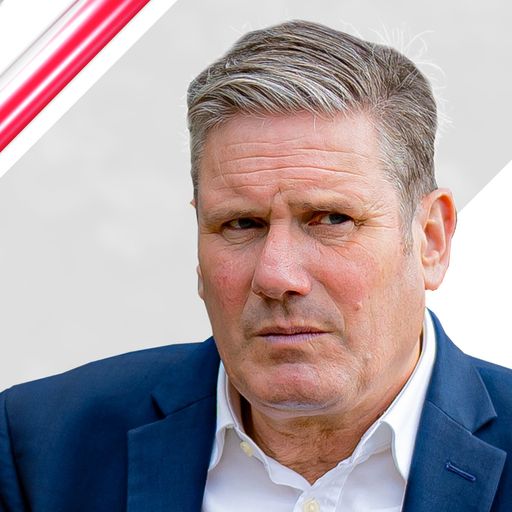 The Labour leader has faced growing pressure – including from fellow Labour member and Mayor of Greater Manchester Andy Burnham – to outline more details on the key policies a government with him at the helm would bring in.

Last week, Sir Keir published an 11,500 word essay on how he would change the UK ahead of the party’s conference.

Many will be hoping for more details to be revealed in his keynote speech which will draw the conference to a close.

It is expected that Sir Keir’s wife Victoria will be in Brighton to watch the address.

Google dismantles Health unit in favor of tried-and-tested ‘throw everything at...