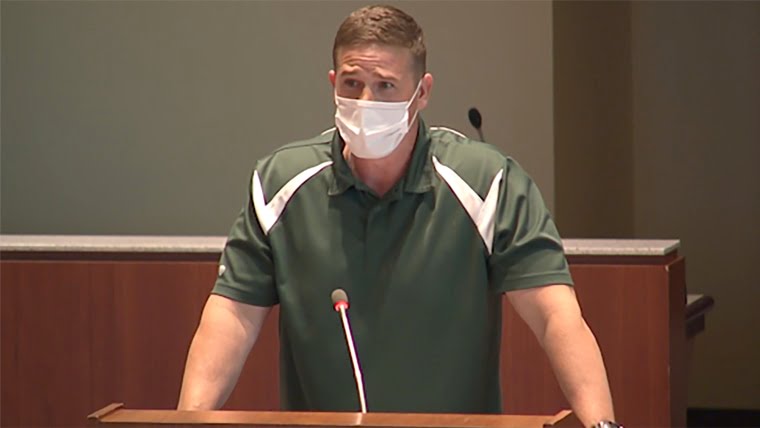 The northern Virginia gym teacher said he would not refer to transgender students by the pronouns they use, citing his religious convictions.

RICHMOND, Va. — The Supreme Court of Virginia has upheld a lower court ruling that ordered the reinstatement of a northern Virginia gym teacher who said he won’t refer to transgender students by the pronouns they use.

Loudoun County Public Schools appealed to the state Supreme Court after a judge ruled that the school system violated the free speech rights of teacher Tanner Cross by suspending him after he spoke up at a school board meeting.

Byron "Tanner" Cross, a physical education teacher at Leesburg Elementary School, speaks at a school board meeting in Loudoun County, Va., in May.WRC

Cross, a teacher at Leesburg Elementary, cited his religious convictions at a May board meeting in which the school board debated proposed changes to its policies in treatment of transgender students. Cross said he would not use the pronouns used by transgender students.

School boards across the state have been revising their policies to be more inclusive of transgender students in accordance with a new state law. But Loudoun County, outside the nation’s capital, has been a particular flashpoint in the debate over not just transgender students but also how students learn about racism and race relations.

The school system said it suspended Cross in part because his comments caused a disruption at the school. But the lower court judge, James Plowman, and the state Supreme Court agreed that the handful of calls fielded by school administrators did not cause the type of disruption that warranted a suspension.

Tuesday’s ruling leaves in place a temporary injunction that bars the school system from suspending Cross. A trial is scheduled for next week in Loudoun County to settle the issue permanently.

Since Cross filed his lawsuit in May, two additional teachers in Loudoun County have joined him as plaintiffs.

My Friends and I Swap Nudes as a Form of Pandemic...

How to Stay Safe Using Dating Apps and Websites