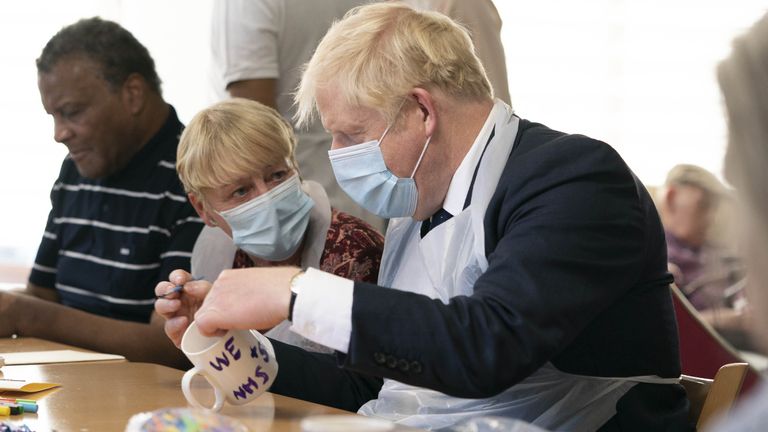 The House of Commons votes by 319 to 248 in favour of a 1.25 percentage point rise in National Insurance contributions from next April as MPs give their support to Boris Johnson’s NHS and social care plans.

MPs have backed a tax hike to boost funds for dealing with the NHS treatment backlog and to reform social care in England.

On Wednesday night, the House of Commons voted by 319 to 248, majority 71, in favour of a 1.25 percentage point rise in National Insurance contributions from next April.

The backing for Prime Minister Boris Johnson’s plans, which he admits are a breach of a Conservative manifesto promise not to raise major taxes, came despite five Tory MPs rebelling to vote against the government.

They included former work and pensions secretary Esther McVey. And a further 37 Conservative MPs recorded no vote, with many of them choosing to actively abstain.

Ministers have said the estimated £12bn a year raised by the new “health and social care levy” will be used to help tackle soaring waiting lists for NHS treatments as a result of the coronavirus pandemic.

It will also be spent on changes to the social care system that are scheduled to come into force from 2023.

But Labour have branded the UK-wide rise in National Insurance – paid by workers and businesses – as a “tax on jobs” and claimed it would not fix the problems in social care.

During a Commons debate on the government’s plans, Labour’s shadow chancellor Rachel Reeves accused ministers of attempting to rush the plans through parliament before they “unravel”.

Wednesday night’s vote on the proposals came just a day after Mr Johnson had announced them, with some criticising the little time MPs were given to consider them.

Ms Reeves told MPs: “Social care is a huge challenge facing our country. There are other challenges facing us too. We need to do things differently.

“Labour’s test is simple: Does it fix the problem? And does it do so in a fair way? The answer to both those questions in relation to these proposals is no.

“That is why Labour will vote against this unfair, job taxing, manifesto-shredding, tax bombshell this evening.”

The government also faced opposition from its own benches to the proposals, with Tory former minister Jake Berry telling the prime minister he risks creating an “un-Conservative” and permanent “NHS tax”.

The Rossendale and Darwen MP, who chairs the Northern Research Group of Tories, said: “If you create an NHS tax, you have an NHS tax forever, it will never go down, it can only go up.

“No party is ever going to stand at an election and say I’ve got a good idea, vote for me, I’ll cut the NHS tax.

“So I just think there’s huge danger for us in creating such a hypothecated tax and having it on people’s payslips.

“It is fundamentally un-Conservative and in the long term it will massively damage the prospects of our party because we will never outbid the Labour Party in the arms race of an NHS tax and that’s why I don’t think this is the right way to do it.”

Prominent Conservative backbencher Steve Baker claimed his party were “in a dreadful position” and would have to “rediscover what it stands for”.

“We all know that eventually as a socialist you run out of other people’s money and I have to say I’m sorry ministers I’m not going to be able to vote with you tonight because some of us are going to have to be seen to be standing for another path,” he said.

Peter Bone criticised Number 10 for conflating social care reform with extra money to deal with NHS waiting lists, and fellow Tory MP Richard Drax asked where was “the vision of this Singapore-style low-tax economy attracting the world’s best to this country”.

Raising taxes ‘a very Conservative thing to do’

Outside of the Commons, Mr Johnson’s former chief adviser Dominic Cummings posted on Twitter: “Tell your friends: the Tories are making the young – who can’t get a house & working for average/below average income, already screwed by a decade of hapless Tory government – to work harder to subsidise older richer people. They promised to do the opposite.”

Immediately before Wednesday night’s vote, the prime minister spent almost an hour addressing a meeting of the Tory party’s 1922 Committee.

He assured Conservative backbenchers that the party remained committed to free enterprise, the private sector and “low taxation”.

But he said he could not think of a “better use” for taxpayers’ money than spending on the NHS.

Earlier on Wednesday, the Institute for Fiscal Studies (IFS) warned the money raised by the National Insurance increase risked being permanently swallowed up by the NHS with “little if any” left over for social care.

Under the government’s plans the NHS will get the majority of the £36bn raised in the first three years, with £5.4bn for social care in England.

Health Secretary Sajid Javid has insisted that “more and more” of the money raised by the levy would go towards social care in future years, but he has failed to say how much and when.

Yet Mr Javid told Sky News on Wednesday there will be “enough money” to pay for reforms to the care sector.

Scotland, Wales and Northern Ireland will receive an additional £2.2bn in health and social care spending from the tax rise.

The SNP claimed Scotland could be “sold short” and receive “less in return than the money taken from Scottish-based National Insurance payers”.