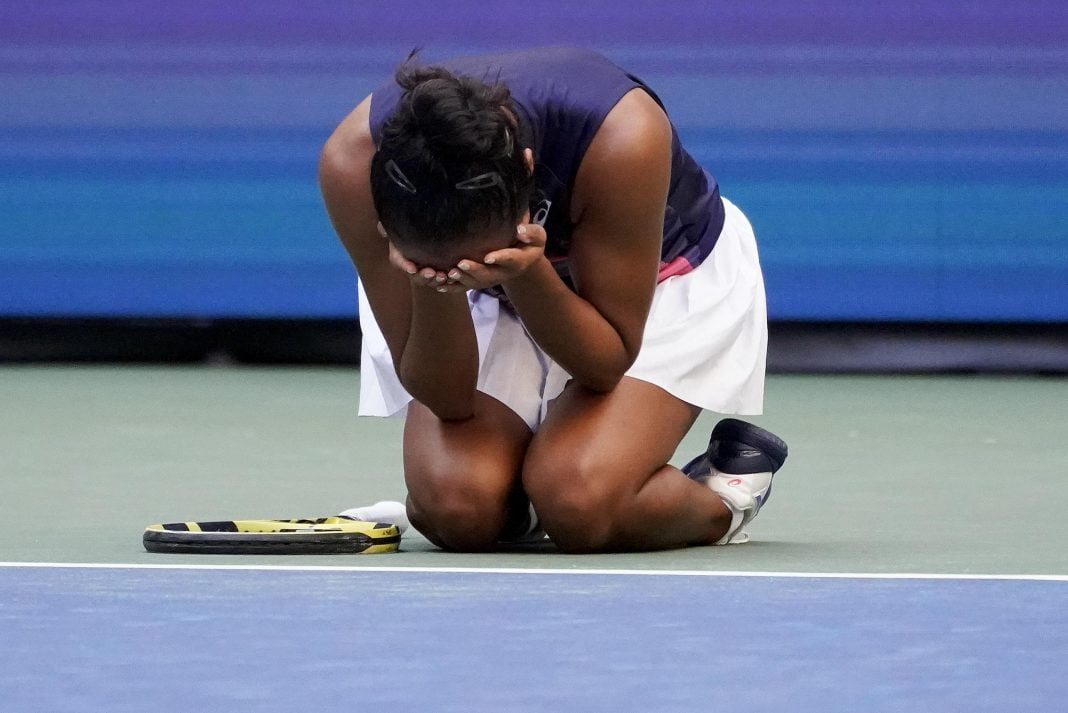 NEW YORK (AP) — When Leylah Fernandez wins a pivotal point at the U.S. Open — and she’s won enough of them to become the tournament’s youngest semifinalist since Maria Sharapova in 2005 — the teenager with the exciting game and enthusiasm to match raises her right fist or windmills her arms, firing up herself and the crowd.

What often happens next, after good points or bad, is just as important to the success of the unseeded Canadian left-hander with the quick reflexes: She’ll turn her back to the court and her opponent, face the wall behind the baseline for a few moments, gather herself and repeat whatever that day’s mantra of choice is.

During Tuesday’s 6-3, 3-6, 7-6 (5) victory against No. 5 seed Elina Svitolina in Arthur Ashe Stadium, which followed wins over past U.S. Open champions and former No. 1s Naomi Osaka and Angelique Kerber, Fernandez focused on self-belief.

“I was only thinking of trusting myself, trusting my game. After every point, win or lose, I would always tell myself, ‘Trust my game. Go for my shots. Just see where the ball goes,’” said Fernandez, who turned 19 on Monday and had never been past the third round in her previous half-dozen major appearances. “I see what I’m feeling. I see if there’s one phrase that really catches me or that makes me more motivated than the others. I just keep it throughout the match.”

Another Canadian moved into the semifinals when 21-year-old Felix Auger-Aliassime’s opponent Tuesday night, 18-year-old Carlos Alcaraz of Spain, stopped playing in the second set while trailing 6-3, 3-1 because of an issue with a muscle in his right leg. Alcaraz was coming off two five-set wins in a row — including against No. 3 seed Stefanos Tsitsipas — that made him the youngest male quarterfinalist in New York since 1963.

“It’s really tough to end a great tournament like this,” Alcaraz said, “but I had no choice.”

The 12th-seeded Auger-Aliassime is the first man from Canada to reach the U.S. Open semifinals and plays No. 2 Daniil Medvedev next. Medvedev, a 25-year-old from Russia, earned a spot in the final four at Flushing Meadows for the third consecutive year by stopping the surprising run of Dutch qualifier Botic van de Zandschulp 6-3, 6-0, 4-6, 7-5.

With no players from the United States left to pull for, U.S. Open fans are adopting their neighbors from the North — although the 73rd-ranked Fernandez actually is based in Florida after being born in Montreal to a Filipino Canadian mother and an Ecuadorian father.

Fernandez’s father is also her coach but isn’t in New York; he stayed home for what Fernandez called “personal reasons” and is offering tips in daily phone conversations.

“I called him right after the match, when I went to the locker room,” she said. “He honestly told me that I put him through hell and back with this match.”

And the spectators loved every minute of it.

“Thanks to you, I was able to push through today,” she told the crowd after edging Svitolina, the Tokyo Olympics bronze medalist who’s been to two Grand Slam semifinals, including at the 2019 U.S. Open.

Truth is, Fernandez likes the spotlight.

Asked whether she’s more nervous against a top player in a big arena or a lower-ranked player at a smaller site, her reply was simple: “There’s no difference.”

Hard to argue that right now.

It was touch-and-go down the stretch — even after Fernandez grabbed the opening set, even after she led 5-2 in the third. One way in which she held a clear advantage: Of points that lasted more than eight shots, Fernandez won 26, Svitolina 16.

Five times, Fernandez was two points from winning but failed to collect the next point. Finally, at 5-all in the tiebreaker, she moved to match point when she smacked a down-the-line passing shot that got past Svitolina with the help of a bounce off the net tape.

Fernandez gestured as if to say, “Sorry about that,” while Svitolina put a hand to her mouth in dismay.

“A little bit lucky,” Fernandez said later. “But I’ll take all the luck I can get.”

Svitolina’s backhand contributed to her undoing late, and when a return from that side landed long, it was over. Fernandez dropped to her knees at the baseline and covered her face; Svitolina walked around the net to come over for a hug.

Next on this magical ride for Fernandez will come yet another test against a player who is ranked higher and has more experience on the sport’s biggest stages. On Thursday, she will play No. 2 Aryna Sabalenka, a Wimbledon semifinalist in July, who defeated French Open champion Barbora Krejcikova 6-1, 6-4 at night.

Waiting for her night match, Sabalenka said she practiced during Fernandez vs. Svitolina, “and we didn’t really need to watch the score because we heard the crowd really yelling.”

Krejcikova was the only woman remaining in the field who already has a Grand Slam title.

But she said her play was affected against Sabalenka by “not really being in a perfect shape” after dealing with cramps and dizziness in her fourth-round win Sunday over two-time major champ Garbiñe Muguruza. Krejcikova took a medical timeout late in the match, then took her time between points down the stretch, and Muguruza told her that behavior was “so unprofessional.”

Asked about that Tuesday, Krejcikova said: “I got really humiliated by a Grand Slam champion, which I’ve never seen.”

As in the women’s draw, only one man in the quarterfinals already owns a major trophy: Novak Djokovic, who not only is seeking a record-breaking 21st but also trying to become the first man since Rod Laver in 1969 to win a calendar-year Grand Slam.

Medvedev has come close. He lost to Djokovic in this year’s Australian Open final and to Rafael Nadal in the 2019 U.S. Open final.

The only way he could meet Djokovic this time would be in the title match on Sunday. But first things first.

“I don’t think about him, because as we saw, anybody can beat anybody,” Medvedev said. “If he’s in the final, and if I’m there, I’m happy. He’s also happy, I guess.”

The Horrors, ‘Against The Blade’ – Single Review