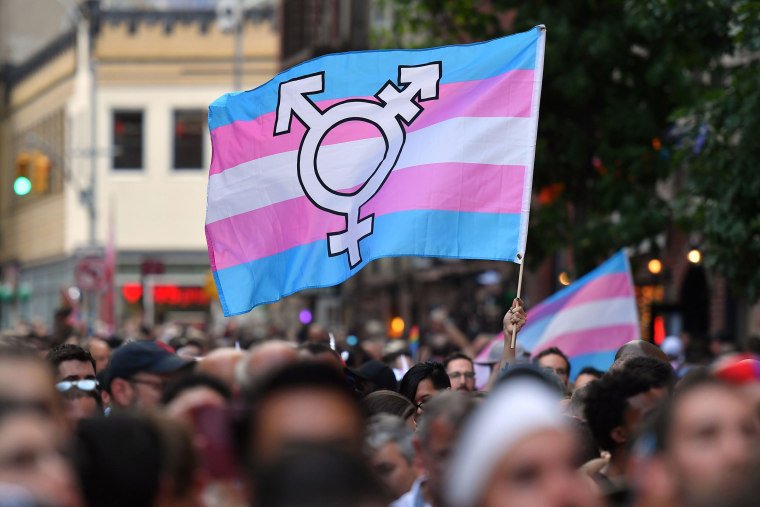 The suit is seeking to strike down directives allowing transgender workers and students to use bathrooms and join sports teams that align with their gender identity.

A person holds a transgender pride flag as people gather on Christopher Street outside the Stonewall Inn for a rally to mark the 50th anniversary of the Stonewall Riots in New York, on June 28, 2019.Angela Weiss / AFP – Getty Images fileAug. 31, 2021, 4:58 PM UTCBy Reuters

A coalition of 20 Republican-led states filed a lawsuit on Monday seeking to strike down Biden administration directives allowing transgender workers and students to use bathrooms and locker rooms and join sports teams that correspond with their gender identity.

The states, led by the office of Tennessee Attorney General Herbert Slatery, in a complaint in Tennessee federal court said June guidance from the Equal Employment Opportunity Commission and U.S. Department of Education improperly expanded on a 2020 U.S. Supreme Court ruling that extended anti-discrimination protections to transgender workers.

The court in Bostock v. Clayton County said employers cannot terminate workers because of their gender identity or sexuality. The justices expressly declined to decide if the ruling applied to sex-segregated bathrooms and locker rooms, the states said on Monday, but the EEOC and DOE improperly concluded that it did.

Slatery said in a statement that the agencies had usurped Congress’ power to change federal law.

“All of this, together with the threat of withholding educational funding in the midst of a pandemic, warrants this lawsuit,” he said.

Arizona, Georgia, Indiana and Ohio were among the states that joined the lawsuit.

The EEOC and DOE did not immediately respond to requests for comment.

The Supreme Court in Bostock held that the bar on workplace sex discrimination in Title VII of the Civil Rights Act of 1964 extended to bias based on sexual orientation and gender identity.

DOE in its June guidance concluded that because Title IX of the Education Amendments of 1972, which bars sex bias in federally funded educational programs, borrowed language from Title VII, Bostock also applied to schools.

The department said, for example, that preventing a transgender high school girl from using the girls’ restroom or trying out for the girls’ cheerleading team would violate Title IX.

The 4th U.S. Circuit Court of Appeals last year in GG v. Gloucester County School Board held that Title IX allows transgender students to use the bathroom of their choice. The Supreme Court in June declined to take up the case.

The EEOC, meanwhile, said in its guidance that in light of Bostock, Title VII allows transgender workers to use the bathrooms of their choice and to dress consistently with their gender identity.

The states in Monday’s lawsuit said Bostock was not nearly so broad. The text of Title IX is materially different from that of Title VII, and the Supreme Court ruling did not extend to sex-segregated areas of workplaces, they said.

The states said both agencies had exceeded their authority in issuing the guidance and had violated the Administrative Procedure Act by not going through the rulemaking procedures required by the law.

They also accused the agencies of violating the 10th Amendment of the U.S. Constitution by intruding on states’ authority over privacy expectations in the workplace and in schools.

The states are seeking to strike down the guidance, and declaratory judgments that Title VII and Title IX do not bar employers and schools from maintaining facilities segregated by sex assigned at birth.

The case is Tennessee v. U.S. Department of Education, U.S. District Court for the Eastern District of Tennessee, No. 3:21-cv-00308.

How erotica can be good for your mental health

Hulu Is Being Haunted By An Evil Spirit As 2021 Huluween...