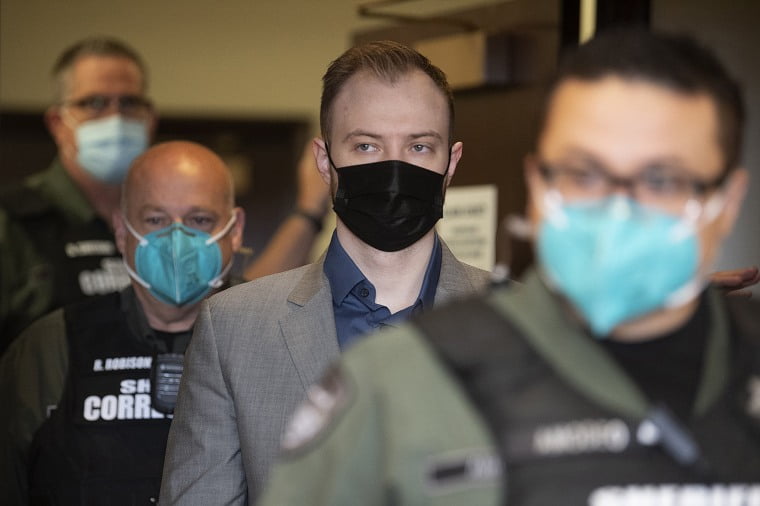 “There’s no excuse for what happened to Nikki. This hate crime wounded our community,” the Facebook group Justice for Nikki wrote in light of the findings.

David Bogdanov is escorted into the courtroom for the verdict in his trial at the Clark County Courthouse in Vancouver, Wash., on Aug. 27, 2021.Amanda Cowan / APAug. 30, 2021, 2:22 PM UTCBy The Associated Press

VANCOUVER, Wash. — A 27-year-old man has been convicted of second-degree murder and a hate-crime offense in the death of a transgender teen in Washington state two years ago.

Prosecutors said Bogdanov met 17-year-old Nikki Kuhnhausen in downtown Vancouver in June 2019, and that he strangled her with a phone charger cable after engaging in sexual contact in the back seat of his car and discovering she was transgender.

Kuhnhausen’s family and supporters exclaimed “Yes!” quietly and tearfully as the hate-crime verdict was read in court.

“We were all holding hands while we were awaiting the verdict to be read and that was really powerful,” said Linden Walls, a member of the group Justice for Nikki. “It felt like we were all together … and the sense of relief that came that we got justice for Nikki, that we were able to push this and the jury could see it and did the right thing.”

Bogdanov, of Vancouver, claimed self-defense, testifying that he wrapped the cord around her shoulder to prevent her from reaching a gun he had near the driver’s seat after he ordered her to get out of the car. The cord slipped to her neck, he said.

He faces a range of 11 to 19½ years in prison when he is sentenced Sept. 9, prosecutors said. His attorneys declined to comment until after the sentencing.

After Kuhnhausen’s death, Bogdanov dumped her body down the side of Larch Mountain, booked a one-way flight to Ukraine and called a friend to “get rid” of his car, according to trial testimony. He returned to the U.S. about six weeks later.

“The long buildup to this trial, and the defense’s attempts to somehow paint Nikki, who was a 17-year-old girl, as being ‘responsible’ for the defendant’s violent actions, were excruciating for us, and particularly for Nikki’s mother Lisa,” the group wrote. “There’s no excuse for what happened to Nikki. This hate crime wounded our community.”

In March 2020, Gov. Jay Inslee signed into law House Bill 1687 — dubbed the Nikki Kuhnhausen Act — that prevents a criminal defense based on discovery of a victim’s actual or perceived gender identity or sexual orientation.

On the 4th of July, thousands of people in D.C. celebrate...