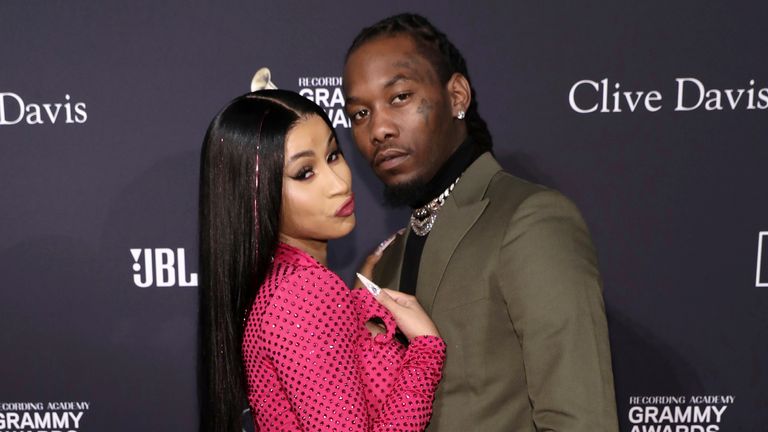 Image: Cardi B and Offset have welcomed their second child. Pic: AP

Cardi B filed for divorce in September last year, saying the pair had been living in a “bona fide state of separation” and that their marriage is “irretrievably broken” – but the pair are now back together.

Cardi B has given birth to her second child with husband rapper Offset, who she filed to divorce from a year ago.

The WAP rapper revealed the news on Instagram, with a picture of her newborn son wrapped in a blue blanket.

Partner Offset, who is part of the group Migos, is pictured looking at their new little bundle of joy while Cardi B is adorned in a Louis Vuitton blanket.

The post was captioned “9/4/21”, alongside blue love heart, dinosaur and teddy bear emojis.

Cardi B and Offset – who has three children from previous relationships – married in 2017 and are already parents to Kulture, three.

They said: “We are so overjoyed to finally meet our son. He is already loved so much by family and friends and we can’t wait to introduce him to his other siblings.”

Cardi B revealed she was expecting while on stage at the BET Awards in June while performing with her husband.

It was the second time she used a TV appearance to announce a pregnancy, after revealing she was expecting her first child during her performance on Saturday Night Live in April 2018.

Offset and Cardi B started dating in 2017 and got married in the same year – but their relationship was plagued by reports of his cheating.

Offset climbed on stage in 2018 at Rolling Loud to ask for Cardi B’s forgiveness.

However, it wasn’t enough, and Cardi B filed for divorce in September last year, saying they had been living in a “bona fide state of separation” and that their marriage is “irretrievably broken”.

The pair are now back together.