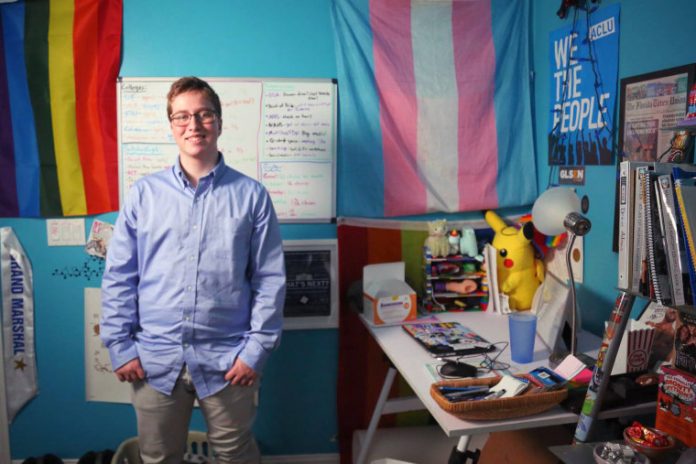 Circuit courts may be split on rules that ban trans students from using the bathrooms of their gender identity, which could prompt the Supreme Court to step in. 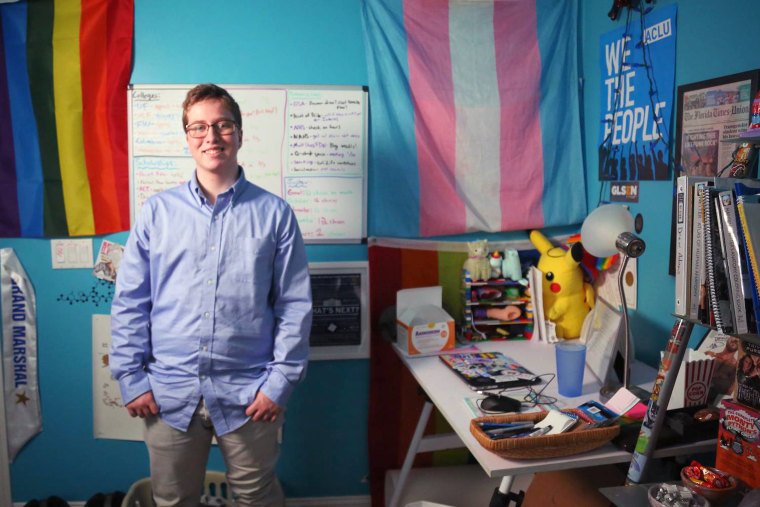 Andrew Adams filed a complaint against his Florida school board in 2017 over a policy that banned him from using the boys' bathroom. Lambda LegalAug. 27, 2021, 3:29 PM UTCBy Jo Yurcaba

A federal appeals court this week vacated a lower court’s ruling in favor of a transgender student’s right to use the bathroom of his gender identity at school. Experts say the appeals court’s move could lead the Supreme Court to take up the issue sometime soon.

Last year, a three-judge panel for the 11th Circuit U.S. Court of Appeals ruled 2-1 in favor of Andrew Adams, a transgender student in Ponte Vedra, Florida, who sued his school district in 2017 over a policy that barred him from using the bathroom of his gender identity.

His lawyers argued that the policy violated his rights under Title IX of the Education Amendments of 1972 and the equal protection clause of the 14th Amendment. Judge Beverly Martin, who wrote the majority opinion, agreed.

On Monday, however, the full 11th Circuit Court, based in Atlanta, vacated that ruling in a majority vote, meaning that all 12 judges will now hear the case again. Experts said that, given the court’s conservative bent, the rehearing probably won’t go in Adams’ favor.

“Given the theological makeup of the 11th Circuit and given the way that they granted a rehearing here, I would say it’s pretty likely that there is a majority of the justices who will say that the school district has the right to make this decision,” said Paul Smith, a law professor at Georgetown University who also argued the landmark Supreme Court case Lawrence v. Texas, which found sodomy laws unconstitutional in 2003.

If that happens, circuit courts would be split on whether policies that bar transgender students from the bathrooms that align with their gender identity are constitutional or violate Title IX.

Given that split, Smith said it’s “possible, even likely” that the Supreme Court would grant certiorari, or accept a petition to review and hear the case should Adams and his lawyers request it.

An increasing number of circuit courts have ruled in favor of transgender students in similar cases.

The 4th U.S. Circuit Court of Appeals, based in Richmond, Va. — first in 2016 and again in 2020 — ruled in favor of Gavin Grimm, a transgender student who sued the Gloucester County School Board in Virginia over a policy that barred him from using the boys’ restroom. The school board appealed to the Supreme Court, but the court decided in June, without comment, that it wouldn’t take up the case. On Thursday, the school board agreed to pay $1.3 million for Grimm’s legal costs.

The 7th Circuit, based in Chicago, ruled in favor of a trans student in a similar case in 2017. The 3rd Circuit, in Philadelphia, in 2018 and the 9th Circuit, in San Francisco, last year also rejected arguments by cisgender students that having to use the bathroom with transgender students violated Title IX and their rights to privacy.

If the 11th Circuit breaks that streak of wins for trans students and rejects both of Adams’ arguments — that the bathroom policy is discrimination prohibited under Title IX and violates the equal protection clause — then there would be a direct conflict in the circuit courts’ decisions on the issue, and “that would be a pretty strong argument for certiorari, assuming Lambda Legal and the client ask for it, which they might not,” Smith said.

Adams’ case not ‘a sure loser’ at the Supreme Court

If Adams does request review, the Supreme Court would have two options, said Anthony Michael Kreis, an assistant professor of law at Georgia State University.

It could either summarily reverse the 11th Circuit’s decision in favor of the school board, “which they could do, but I think that’s unlikely,” he said. “I think what would be much more likely to happen is the Supreme Court will grant cert and you will have a full briefing, full oral argument and a very lengthy opinion about the issue to give us some kind of national resolution.”

But Kreis said it’s surprising that the 11th Circuit appears to be taking a position that would set it up for a potential Supreme Court review given the high court’s 2020 landmark decision in Bostock v. Clayton County, which granted LGBTQ people protection from employment discrimination under Title VII of the Civil Rights Act of 1964.

In his majority opinion, Justice Neil Gorsuch wrote that discrimination based on gender identity and sexual orientation is sex discrimination, because it’s based on sex stereotyping.

“Generally speaking, Title IX has been interpreted in a way that’s consistent with Title VII,” Kreis said, adding that the Education Department under President Joe Biden has said that Title IX protects LGBTQ students, including transgender students who want to use school facilities consistent with their gender identity.

“And so I’m slightly surprised, given the fact that the Supreme Court and now the federal government have both interpreted sex discrimination to be inclusive of trans discrimination cases,” Kreis said of the 11th Circuit Court. “It’s kind of an interesting decision for the court to pick this fight at this time.”

However, if the case does make it to the Supreme Court, Smith said it’s not “a sure loser.”

The justices could use their reasoning in Bostock to find that Title IX protects Adams from sex discrimination. Alternatively, Smith said, the Supreme Court would have to find a way to distinguish school bathroom policies that target trans students from employment discrimination based on transgender status.

He said a conservative legal argument could do that by arguing that bathroom policies based on sex assigned at birth are justified by privacy concerns. A similar argument can’t be made for employment discrimination.

Kreis said that what’s happening with the 11th Circuit could be an example of the last conservative legal efforts against LGBTQ rights. 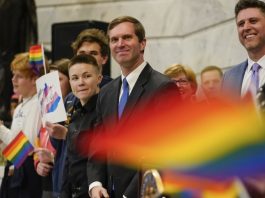