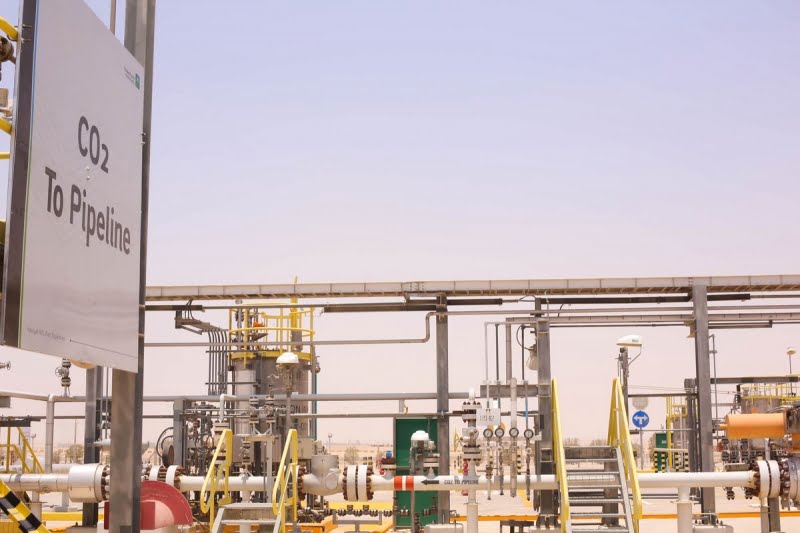 Location sign for the ‘CO2 to pipeline’ apparatus at the Hawiyah Natural Gas Liquids Recovery Plant, operated by Saudi Aramco, in Hawiyah, Saudi Arabia, on Monday, June 28, 2021. The Hawiyah Natural Gas Liquids Recovery Plant is designed to process 4.0 billion standard cubic feet per day of sweet gas as pilot project for Carbon Capture Technology (CCUS) to prove the possibility of capturing C02 and lowering emissions from such facilities.

Last year, a pipeline carrying compressed carbon dioxide mixed with hydrogen sulfide ruptured, engulfing the small town of Satartia, Mississippi, in a green haze, leaving many residents convulsing, confused, or unconscious. That explosion serves as a vivid warning about the risks posed by what could be the next generation of pipelines to crisscross the US, in a new investigation by HuffPost and the Climate Investigations Center.

“It was almost like something you’d see in a zombie movie,” Sheriff’s Officer Terry Gann tells journalist Dan Zegart about what happened that night. Zegart pieces together the events of February 2020 through harrowing 911 calls and the voices of family members racing to reach others before the toxic haze could overcome them.

The story is a scathing investigation of the company, Denbury, that operates the pipeline, which did little to nothing to warn local officials and residents about the danger they faced, according to Zegart’s reporting. It’s also probably the closest thing to a PSA on the risks other communities could face if proposals to build out tens of thousands of miles of CO2 pipelines come to fruition.

CO2 is the most high-profile greenhouse gas driving the global climate crisis. To keep CO2 from doing its damage in the atmosphere, some lawmakers and big green groups are pushing for new technology to capture carbon dioxide from the air or from smokestack emissions. That captured carbon dioxide would ultimately need to be transported to places where it can be stored underground. It’s an idea that’s gained so much steam recently that the bipartisan infrastructure package making its way through Congress includes billions of dollars to develop the technology and the network of pipelines that would come with it.

Fossil fuel companies are also big backers of carbon capture technologies, selling it as a way for them to clean up their emissions while still selling oil and gas products responsible for climate change. They already move and use concentrated CO2 in a process called enhanced oil recovery: they shoot CO2 into the ground to help them extract more from their wells. The Denbury pipeline that exploded was transporting CO2 for that purpose.

CO2 might sound harmless — but at high concentrations, it’s an asphyxiant

Despite the growing support for carbon capture, there’s not a lot of information out there for the public about what this proposed new infrastructure could mean for communities like Satartia. None of the residents Zegart spoke to had heard about plans to build more CO2 pipelines across the country — even as officials eye the Gulf region as a potential hub for carbon capture in the US.

CO2 might sound harmless — it’s in the air we breathe, after all — but at high concentrations, it’s an asphyxiant. Did you know that CO2 accidents kill around 100 workers globally each year? I did not, and I report on this kind of stuff for a living. What happened in Satartia is the world’s first known example of mass outdoor exposure to piped CO2, according to the World Health Organization’s Climate Change and Environmental Determinants of Health Unit. It might not be its last.

To learn more, read Zegart’s reporting in HuffPost and hold on, this story is a nail-biter.

12 Ways to Stay Safe at the Pool