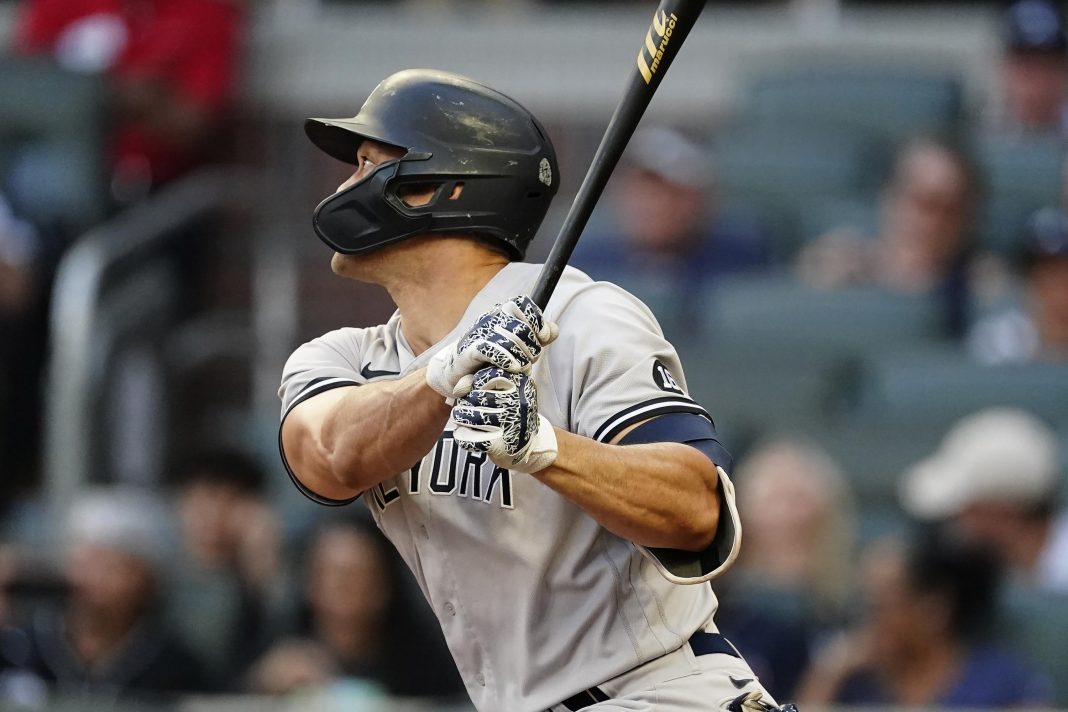 ATLANTA (AP) — In a historic matchup between two of baseball’s hottest teams, the New York Yankees kept right on rolling.

Giancarlo Stanton homered and drove in three runs to carry the Yankees to their 10th straight victory, cooling off the streaking Atlanta Braves 5-1 on Monday night.

New York snapped the first-place Braves’ own nine-game winning streak in the first regular-season matchup in almost 120 years between teams that had won at least nine in a row.

“We like winning,” Gary Sánchez, who drove in New York’s other two runs, said through an interpreter. “Winning is fun.”

Stanton homered in the second inning off Huascar Ynoa (4-3) and snapped a 1-all tie in the sixth with a two-out, two-run double.

“He’s a unicorn,” manager Aaron Boone said. “He does things every night that are a little bit different than everybody else.”

Sánchez gave New York some insurance with another two-out hit in the eighth, singling through the shift to bring home two more runs.

The Yankees haven’t lost since they played in an Iowa cornfield, giving up a walk-off homer to the White Sox in the Field of Dreams game on Aug. 12.

On a field of sweat night in Atlanta — the temperature was 88 degrees at first pitch — Jordan Montgomery (5-5) worked around four walks in his five-inning stint. He limited the Braves to two hits, including a homer by Dansby Swanson.

The Yankees’ bullpen took it from there. Jonathan Loaisiga pitched two scoreless innings, striking out four. Wandy Peralta scattered a couple of hits in the eighth and Aroldis Chapman finished off Atlanta with a 1-2-3 ninth.

“I didn’t have much going today,” Montgomery said. “But we won.”

In the second, Stanton put the Yankees ahead with his 21st homer — going the opposite way with a 387-foot shot into the Chop House restaurant in right.

The Braves tied it in the bottom half with a long ball of their own. Swanson launched a 408-foot drive into the Atlanta bullpen for his 25th homer of the season.

New York went ahead for good in the sixth, taking advantage of Ynoa’s only spurt of wildness.

After plunking DJ LeMahieu with a pitch, Ynoa retired the next two hitters before issuing his only walk of the night to Joey Gallo.

Stanton made the Atlanta pitcher pay, lining a one-hop double off the wall in left to bring home both runners.

Still, Ynoa turned in another strong start in his second appearance since an extended stint on the injured list after hurting his right hand punching a wall in frustration. He allowed four hits, three runs and struck out nine over six innings.

“I feel like every time he goes out there, he’s always down to compete,” Swanson said. “And that’s something I love about him.”

Montgomery was backed up by a couple of stellar defensive plays, including a diving catch by Gallo down the left-field line to rob Guillermo Heredia of a hit in the second. Aaron Judge also made a nice running catch in deep center.

The game was played in a playoff-like atmosphere, with a near-sellout crowd of 39,176 at Truist Park and plenty of “Let’s Go Yankees!” chants to spice things up.

It marked the first matchup between two teams this hot since Sept. 7, 1901, when the Pittsburgh Pirates took a 10-game winning streak into their contest against the Philadelphia Phillies, who had won nine in a row.

The Phillies won 4-1 for their 10th straight victory, but Pittsburgh went on to capture the NL pennant. The first World Series would not be held for two more years.

The Yankees’ starting outfielders checked in at a combined 19 feet, 6 inches, and 777 pounds.

“The jumbo package,” Boone called it.

Braves pitcher Mike Soroka, out for the season after tearing his Achilles tendon for the second time, took on a new role.

Soroka was a guest analyst on the Braves’ telecast, joining Chip Caray and Jeff Francoeur in the booth.

Yankees: Former closer Zack Britton sustained another injury setback. The left-hander went on the 10-day injured list with a strained left elbow. … Still bothered by a strained left wrist, INF/OF Miguel Andújar was shifted to the 60-day injured list and won’t be eligible to return until Sept. 5. He had to shut down an injury rehab assignment because of lingering pain.

Braves: C Travis d’Arnaud missed his third straight game since going on the paternity list to await the birth of his child. He was again replaced by rookie William Contreras.