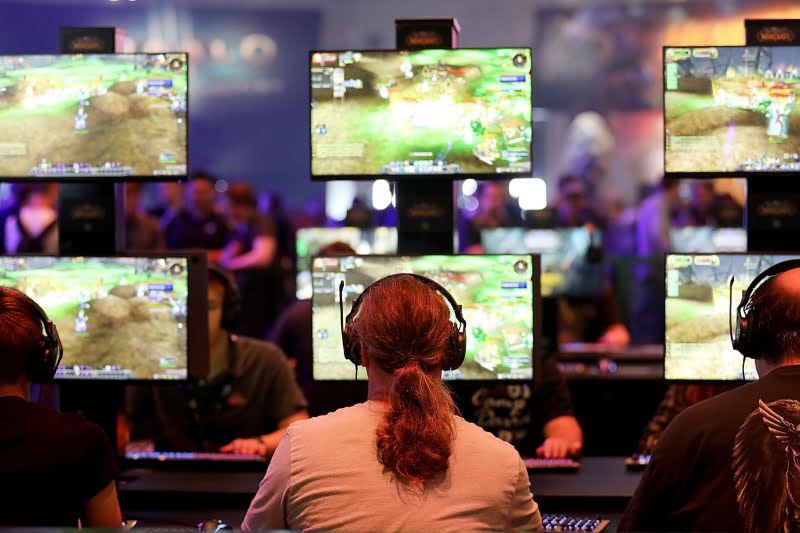 Whether players come to chat, organize activities, buy and sell items, or just to log out, hubs have a language all their own.

Monster Hunter Rise came out in March. Like its predecessor, Monster Hunter: World, Rise tries to make the game a bit more friendly to game—and franchise—newbies. But as the series increasingly embraces the adventure side of the action-adventure genre, the more its hub world, where you craft weapons and armor, snag and stow items, and eat food and chat with NPCs, feels off.

Rise’s hub is like the Monster Hunter villages that came before it, but in Rise the characters have been fleshed out a bit. Even Kamara Village, the hub in Rise, has its own history of sorts. But the NPC characterization feels more like a series of smushed-together archetypes than a collection of fully realized people. And history’s place within the village is only there for convenience, to encourage a new mode of gameplay. The end result feels like something has been cut, like something’s missing that was once there. But to figure out what, we need to look at hub worlds in general, and why they exist in the first place.

Considered to be one of the first stealth games (by Guinness World Records of all things), the 1981 arcade game 005 would also lay the foundation for what a hub is. Unlike overworlds that a character traverses between dungeons or missions, or a world that flows from start to finish like a single level or experience, hub worlds are generally one level that players often return to, and that then leads to other levels.

However, 005’s map was not considered a “hub” the way we think of them now. At the time, it was called a “RasterScan Convert-a-Game.” As Bill Kurtz says in his Encyclopedia of Arcade Video Games, “this 1981 video game was designed so that it could be easily changed into another game in minutes … 005 is a RasterScan Covert-a-Game, which can be later converted to a brand-new top-earning game at a substantial savings.” However, its impact was well felt.

Super Mario 64, one of Mario’s first 3D platforming games, is also many gamer’s go-to for explaining what a hub world is. More than just a level selector, Princess Peach’s castle gives the player details and clues as to what happened before your arrival. But more than that, it gives the player a sense of mood for the levels outside of the hub. That midi-synthesized violin as you run along the bright and saturated reds and blues of the castle decor? It’s more than just a way to make loading easier and for levels to process faster. It’s also used to get the players into the right mindset and suspension of disbelief for the game. Martin Hollis, one of the developers at Rare who worked on the Nintendo 64 classic Goldeneye, says the hub world in Mario 64 influenced their thinking on GoldenEye. Writing on a blog that can only be obtained through the Wayback Machine, Hollis says “the idea for the huge variety of missions within a level came from Super Mario 64.”

In their paper “Procedural Level Design for Platform Games,” programmers and researchers Kate Compton and Michael Mateas of the Georgia Institute of Technology used cell structures to describe how to implement nonlinear level design. One such design, as described in figure 2, refers to a “hub” design, where a central space then leads off to multiple other spaces that players can enter.

Qatar reopens to vaccinated travelers in 2021