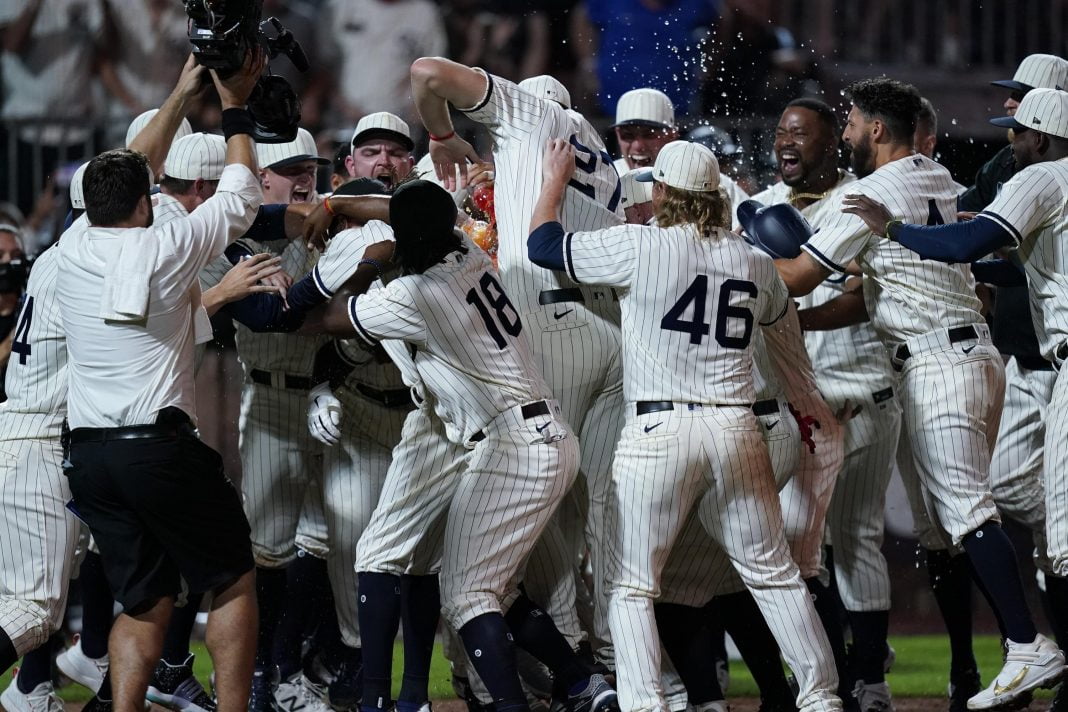 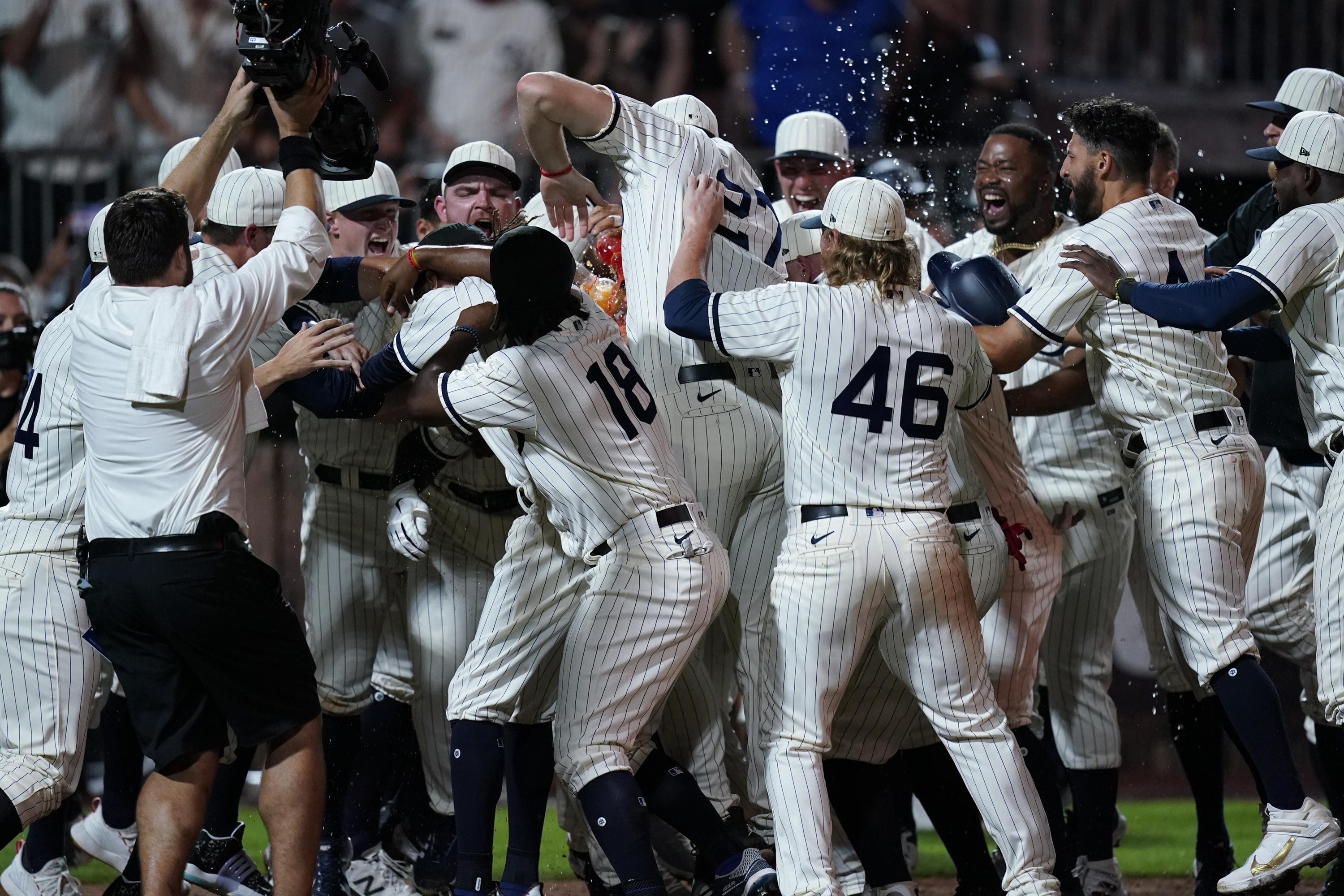 Anderson hit a two-run homer with one out in the ninth inning into the cornfield to end the Field of Dreams game in cinematic fashion, as the Chicago White Sox outslugged the New York Yankees 9-8 Thursday night in the first Major League Baseball game in Iowa.

“The fans came to see a show, and we gave them a show,” Anderson said.

Anderson, who had an earlier RBI double, hit the first pitch from Zack Britton (0-1) for his 13th homer of the season.

Clearly having as much fun as anyone in attendance, Anderson danced his way around the bases after the showstopper of a hit and wiggled his hands near his neck as he headed for home and the celebratory dousing at the plate from his teammates.

“Being able to walk it off was definitely one of the best moments of my career, for sure,” said Anderson, who sent the crowd of 7,832 back through the corn and to their cars — after a light and fireworks show — at the made-from-scratch stadium.

Aaron Judge and Giancarlo Stanton each hit two-run homers for the Yankees in the top of the ninth off All-Star closer Liam Hendriks (7-2), as the movie-themed throwback event became a home run hitting contest into the cornfield.

This was precisely the thrill many players hoped aloud for prior to the night. There were eight longballs in all, two by Judge.

It had a Hollywood finish, too, with the game-clinching shot by Anderson. So what if it was more “The Natural” than “Field of Dreams”?

“He’s been the energy, the man, of our team. What a leader,” said White Sox acting manager Miguel Cairo, who filled in for Tony La Russa.

They played next to the filming site of the beloved 1989 movie starring Kevin Costner, Amy Madigan, Ray Liotta and James Earl Jones, and even the Yankees fans who made the trek could hardly have headed home anything but happy with the experience.

Starting pitcher Andrew Heaney, who was tagged for seven runs in five innings in another struggle with his new team, was having a hard time reflecting on the memories in the aftermath.

Still, even though the Yankees fell into fourth place in the AL East — and in the race for two wild-card spots — there will be no forgetting this trip for the rest of their careers.

“That was as special and breathtaking a setting for a baseball game as I’ve ever been part of,” manager Aaron Boone said.

José Abreu hit the first drive into the sea of green stalks, and teammates Eloy Jiménez and Seby Zavala followed him with homers for the White Sox on this vintage summer night in farm country with the teams in 1919-style uniforms to match.

Judge wore custom-painted cleats to commemorate the film, with the famous line “If you build it, he will come,” printed on the tongues and cornstalks on the sides.

League ERA leader Lance Lynn sidestepped a three-run homer by Judge and a solo shot from Brett Gardner to finish five innings for the White Sox, remaining unbeaten in his last eight starts.

Costner started the evening with a star’s entrance, slowly walking out of the cornrows — like Shoeless Joe Jackson and his ghost-like teammates did in the film — before turning to watch the players do the same for their made-for-TV pregame introductions. Costner’s address to the fans included the obligatory question in ode to the famous line from the movie, “Is this heaven?”

No, it’s Iowa, but MLB will be back, as Commissioner Rob Manfred promised for 2022, the teams still to be determined.

“I wish we had a little time here to kind of take it all in and really appreciate it,” Gardner said, “but the season moves along in a hurry.”

La Russa missed the game to attend the funeral for his sister’s husband in Florida. The 76-year-old La Russa would’ve fit right in at the site, with his team in vintage wear.

“I was raised to embrace the history of the game, and I think too often we lose parts of it,” he said earlier this week. “‘Field of Dreams’ is a great movie, and it embraces everything about family and all the game’s all about.”

NOT QUITE MOONLIGHT GRAHAM

Both teams were allowed a 27th man on the roster, so the Yankees chose outfielder Estevan Florial and the White Sox summoned outfielder Danny Mendick. Florial was about as close as a player could come to Moonlight Graham, who got into only one major league game with the New York Giants in 1905, became a doctor in Minnesota and had a significant role in the movie plot. The 23-year-old Florial had 28 prior plate appearances for the Yankees this season.

Yankees: RHP Gerrit Cole and LHP Jordan Montgomery, both on the COVID-19 list since Aug. 2 and 3, respectively, rejoined the team in Iowa and could be slotted back in the rotation this weekend.

White Sox: RF Adam Engel left the game in the eighth with tightness in his right groin.

After an off day on Friday that was built into the schedule as a contingency for rain, the Yankees and White Sox travel east to Chicago to finish the three-game series.