The big-budget series, based on JRR Tolkien’s books, has completed filming in New Zealand for its first instalment and is set to premiere on Prime Video in September next year.

Image: Amazon's production of The Lord of the Rings TV series is moving to the UK from New Zealand for its second season. Pic: Amazon Studios

Amazon Studios’ multi-million dollar Lord of the Rings TV series is moving to the UK from New Zealand for its second season.

Oscar-winning director Sir Peter Jackson used New Zealand‘s rolling mountains, meadows and forests as a backdrop for his famed Lord Of The Rings and The Hobbit film trilogies.

Amazon said the switch “aligns with the studio’s strategy of expanding its production footprint and investing in studio space across the UK, with many of Amazon Studios’ tentpole series and films already calling the UK home”.#

The big-budget series, based on JRR Tolkien’s books, has completed filming in New Zealand for its first instalment and is set to premiere on Prime Video in September next year.

Vernon Sanders, VP and co-head of TV at Amazon Studios, said: “We want to thank the people and the government of New Zealand for their hospitality and dedication and for providing The Lord Of The Rings series with an incredible place to begin this epic journey.

“We are grateful to the New Zealand Film Commission, the Ministry of Business, Innovation and Employment, Tourism New Zealand, Auckland Unlimited, and others for their tremendous collaboration that supported the New Zealand film sector and the local economy during the production of Season One.”

New Zealand’s government was told of the move on Thursday and said it was disappointed at the decision. 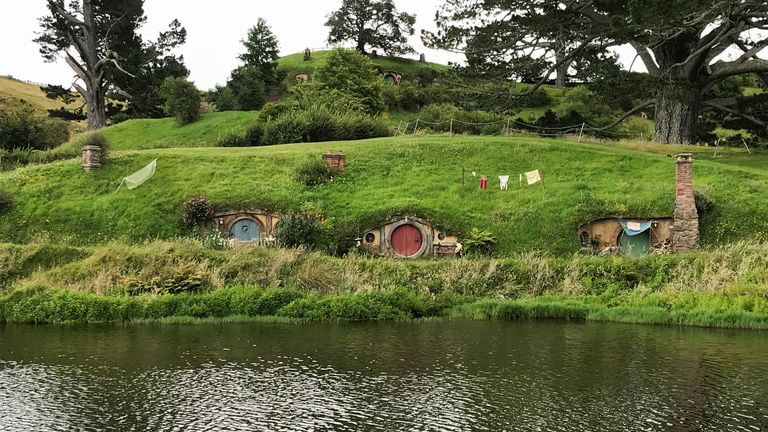 Image: The Hobbiton Movie Set, a location for The Lord of the Rings and The Hobbit film trilogy, is pictured in Matamata, New Zealand

Economic Development Minister Stuart Nash said in a statement: “Amazon Studios advised that post-production work on season one will continue in New Zealand till June 2022.”

It was previously reported that the series was the most expensive ever made – with a budget reported to be around $465m (£336m).

Amazon Studios is also expected to produce five seasons of the show.

Pre-production on season two will begin concurrently in the UK next year, Amazon said.

Culture Secretary Oliver Dowden said: “Delighted to hear that Amazon will be making their blockbuster second series of Lord of the Rings right here in the UK.

“With our strengths in talent, production and the great environment created by UK Government initiatives including the creative tax reliefs and the Film and TV restart scheme, it’s clear that we are attracting the very best content makers in the world to our shores.

“Thousands of high quality jobs all across the UK will be created and supported by The Lord of the Rings television series so this is very exciting news as we build back better.”

Actors among the cast include Cynthia Addai-Robinson, Morfydd Clark, Ismael Cruz Cordova, Sophia Nomvete and Lloyd Owen, and the drama will depict Tolkien’s Second Age of Middle-earth’s history, according to Amazon.

It is set thousands of years before The Hobbit and The Lord of the Rings books and features the “long-feared re-emergence of evil to Middle-earth”.

The series will also be available in more than 240 nations, with new episodes released weekly, according to Amazon.

‘Virgin River’ Season 4 on Netflix: Filming Underway & What We...