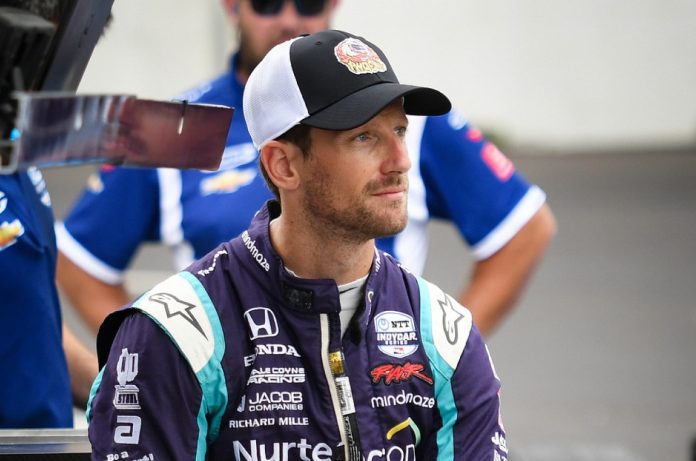 Dale Coyne is still hopeful that he will be able to retain former Formula One ace Romain Grojean, even as more and more speculation links the Frenchman to Andretti Autosport in 2022.

His RWR-Honda teammate in Dale Coyne Racing, Romain Grosjean, competes on all road and street circuits, and will make his debut on the oval at Gateway later this month, and he has had regular strong results this year with a pole position and second place at the Indianapolis Grand Prix.

However, there are increasing rumors that Grosjean will replace Ryan Hunter-Reay at the #28 Andretti Autosport-Honda team, and that he is particularly attractive to an international company like DHL, whose long-term contract with Michael Andretti’s team was extended for just one year at the end of last season. Grosjean’s speed on road and street circuits, which he has shown frequently this season, and his desire to try his hand at oval racing may be enough to convince DHL to stay aboard the No. 28 car.

However, Coyne says he and Grosjean are still negotiating a contract extension.

“I think he’s happy with us, although I understand a lot of people are looking at him right now,” he told Motorsport.com. “We did a good job for him, I think he understands that.

“Andretti’s team is good, and I understand the driver’s desire to go there, but I think we’re doing a good job for him, too. He’s been fast everywhere we’ve run him, in qualifying and in the race, which shows he’s quite ready. But it takes a car to get the job done, and I think he helped show that we’re doing pretty well.”

“He and Olivier [Boisson, the race engineer] have good chemistry, and that’s throughout the team, everyone here. This team is like a family, we’ve heard that from a lot of racers, and they love it. And this family really loves Romain and his family.”

“So we’re still talking, and I hope we stay together.

If he loses Grosjean, Coyne believes the 35-year-old racer has nonetheless demonstrated that the Plainfield, Ill. team is a potential destination for quality racers of all experience levels.

“Yes, in fact, I know it’s true – and if I let you look at my phone records from the last few months, you’d see the proof, too!” – he said. “I think it was seen last year with Alex Palou, and I think that’s true of Santino [Ferrucci] as well. Santino was a guy that everybody dismissed as a cocky kid who didn’t deserve a ride because he wasn’t good enough. He came here and did a decent job, and a very good job at the ovals. He’s worked on changing his personality, and I think it’s become noticeable.”

The future of Coyne’s second car, the #18, which was co-driven by Ed Jones with Jimmy Vasser and James Sullivan, has been the source of much speculation. Sully told Motorsport.com last month that he and Wasser want to be independent, but they are also considering working with another IndyCar team until at least 2022.

“We’ll see what happens with the #18 car,” Coyne said. “I’d like to continue in the same vein as before with Jimmy and Sully, but we also know things change. So time will tell, and we’ll keep talking.”

“Every team owner here is trying to prepare for different scenarios for next year because there are so many moving parts right now. I’d say we’ll know a lot more in the next three or four weeks.”