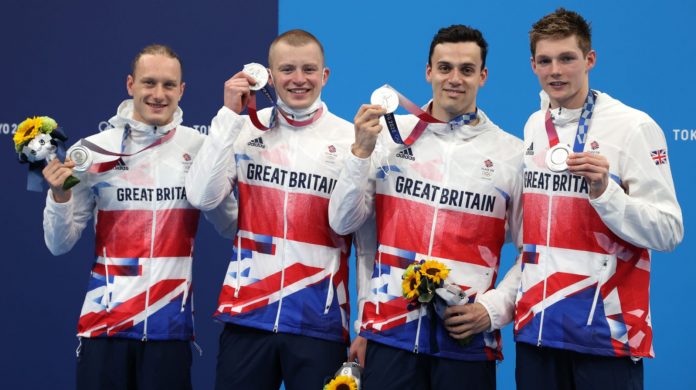 The quartet of Luke Greenbank, Adam Peaty, James Guy and Duncan Scott in the men’s integrated relay set a new European record of 3:27.51, winning a stunning silver in the final heat of a thrilling competition and winning the highest British swimming medal in 113 years.

Team Great Britain finished with an impressive total of four gold, three silver and one bronze medals, placing third in the swimming medal table after America and Australia.

It is the most medals ever won by Britons at the Olympics, surpassing the four golds, two silvers and one bronze won in London in 1908.

By winning silver in the integrated relay, Duncan Scott also became the most decorated British Olympic swimmer with six medals — two in Rio 2016 and four in Tokyo — while Petey now has five.

Britain fought for gold throughout the thrilling medley relay, but was beaten by 0.73 seconds by America, who set a new world record of 3:26.78.

Greenbank fell short of his personal best in the 100m backstroke with a time of 53.34 seconds, Britain was in seventh place after the 100m.

By the time Petey finished the breaststroke with an incredible time of 56.53, the fastest time in relay history, the British team had pulled ahead and had a 0.47 point lead.

Guy gave it his all in the butterfly, finishing with a 50.27, but Olympic champion Caleb Dressel secured the U.S. lead before the final swim.

Although a determined Scott swam another quick anchor swim, he was unable to beat Zach Epple.

The team admitted to being a little disappointed that they didn’t take the gold, but Petey said that just shows the high standards they’ve now set for themselves.

“Unfortunately, we didn’t have quite enough to take that gold. It was very close to a world record, and you can’t ask for more than that.”

“With the success that British swimming has had – and we all have – sometimes you need a little bit of pain, and that hurts.

People back home will say you got an Olympic silver, but that’s the level we’re at right now.”

“Right now we’re not looking at bronze and silver, we’re looking at getting gold. That’s just my way of thinking.

“I know the guys are disappointed with that, too, and it’s just an honest opinion about our performance and what we thought we could do.”

“If someone had said that to us in 2015-16, we would have literally ripped their arm off.

“We had a great week. We’re a little sad we didn’t take the gold today, but we all played our part.”

Greenbank said: “It’s disappointing to be second today when the team had such momentum this week.

“But it was just an incredible result, and we can build on that and come back stronger.”

Scott added: “I’ve been very fortunate to be part of some great relay teams – this is one of them.

“We’re very disappointed at first, but in 2015, when we first started coming together, we won two Olympic silvers in this event, and we’d be happy about that all day long.

“We came here to challenge the Americans like we did last time at the world championships. If you look at the segments, we all swam well.

“It was a tough week, but we have to be happy with that.”

Petey added that the British swim team has come a long way.

“It’s important to reflect on it and figure out how we’re getting better,” he said.

“It’s a time to rest, to recover, to celebrate, because we had the best Games in British team history, and it’s great to be a part of that and to contribute to it in our own way.”

“We’re going to train hard again. A lot of these guys are going to take a big break because sports are hard, it’s 24/7, three six five for seven years, but we’ve come a long way.”

It’s a tough case … But Ben is still motivated

An emotional Proud, who placed fourth in the 50-meter freestyle at the Rio 2016 Games, said: “It’s tough, that’s for sure.

“I would have liked to bring something home, but that’s just the way it happened – it just didn’t happen.

“Swimming has taken me on an amazing journey. It’s been a tough couple of years, but I’m still motivated to go back and keep swimming.

“My family, my girlfriend, everyone has been very supportive. I have a few more years ahead of me.”