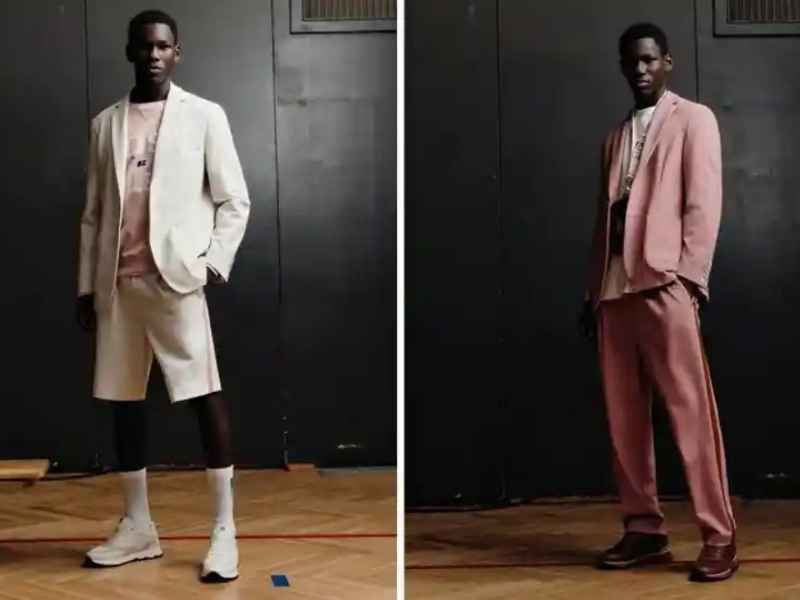 Working from home is rewriting the rules of office wear, and retailers are seeing demand for a hybrid closet.

As the return to the office has become a real possibility, workers in the U.K. are thinking about something they haven’t done in a while: what to wear. This comes after 16 months of working from home, where only a laptop makes up the company and a semblance of presentability is required only for video calls. The conventions of office wear are being reevaluated, especially by men who often wore suits to work. So do they jog their pants and blow the dust off their suits or will elastic waistbands remain?

Since hybrid work — spending part of the work week in the office and part at home — is now seen as a possible post-pandemic option, Sam Kershaw, director of purchasing for menswear website Mr. Porter, suggests that a hybrid closet would be appropriate. “Our customers are not willing to neglect a change of ‘home’ by investing in comfortable, versatile pieces for their closet,” he says. “Especially considering that many of them will continue to work from home in one capacity or another.”

Workout pants and other relaxed pieces have boomed during the pandemic, and earlier this year, pajamas were even considered a fashion item. Kershaw says that this taste for comfort combined with formal tailoring rigor is something shoppers want to keep-but they’ll pair them with things that make them look more elegant. “There is no sudden appearance of a lot of men dutifully wearing a shirt and tie, except in professions that require it,” he says. “Instead, men are wearing more dressy versions of the casual clothes we wore during isolation, as well as easy-to-wear separates.” He describes the look as “a middle ground between casual and formal.”

Other brands have noticed a demand for clothes that fall between these two aesthetics. Marks & Spencer is working on smart-casual suits that combine a soft shoulder blazer and pants that are closer to sweatpants. Hugo Boss, meanwhile, collaborated with Russell Athletic to produce jersey fabric suits, some of which had shorts instead of pants.

Apparel brands are still hoping for an increase in sales after the restrictions are lifted. Speaking to the Guardian in November, Sean Dixon, managing director of Richard James Tailors, said: “I sincerely believe there will be a reaction to the way we’ve all been dressing lately after the restrictions are lifted. I believe there will be an outpouring of expression, a desire to ‘dress up.'”

Kershaw does predict that men will end up shopping in different styles, and says there has been an increase in tailoring and formal wear lately. But, he says, as with many things, the pandemic has been a catalyst for men’s clothing. It accelerated the process of casualization that had already begun. In 2019, market analysts at Kantar reported that suit sales were down 7 percent year over year, and even investment banking has become looser, with Goldman Sachs announcing a new “flexible dress code” in which suits are no longer required.

“Consideration of how and where we wear clothes has been going on for a long time and has undergone significant changes,” Kershaw says. “Traditionally, men had an office closet of suits, dressy shirts … Now men wear sports sweatshirts to lunch, sneakers to work and want to be able to go out for a drink or dinner in a suit and t-shirt. Dressing for occasions has become much more diverse, and that will continue.”

Although Kershaw says that since the restrictions were lifted on July 19, he has noticed that things ranging from elongated shorts to statement watches have become trending, the other thing that struck him the most. “Ultimately, the biggest ‘trend’ we’re seeing is a change in the buying habits of our customers, who are favoring well-made items, with durability and functionality at the forefront,” he says. Hybrid things that can be used for work from home, office meetings and weekend events are just right for those purposes.”

Marvel What If…? writer reveals the two things that were ‘off...