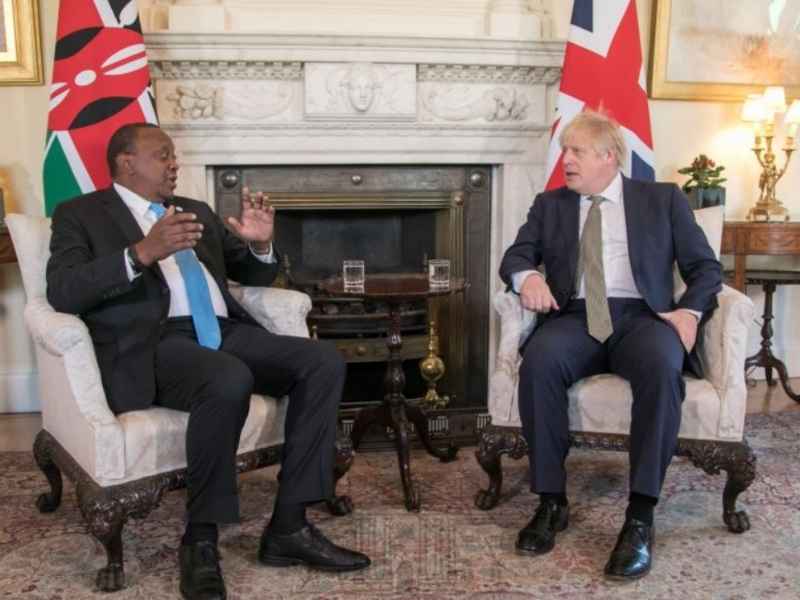 Prime Minister Boris Johnson is expected to formally agree on an initial offer of 817,000 doses for Kenya. A fundraising summit will be held Thursday in London, bringing together other world leaders as well as representatives of business, charities, education and youth.

Johnson and Kenyatta planted a tree in Chequers to symbolize the two countries’ bilateral relationship and commitment to tackling climate change together ahead of the COP26 climate summit in Glasgow.

The U.K. announced Wednesday that it will begin transferring millions of doses of coronavirus vaccine around the world, including to various Commonwealth countries, in line with a promise to provide 100 million vaccinations worldwide by next June.

“They will go to vulnerable countries like Laos and Cambodia, to partners like Indonesia, Malaysia (and) a number of Commonwealth countries from Kenya to Jamaica,” he said.

“It demonstrates that we’re not just doing this because it’s in our own interests. It shows global Britain as a life-saving force for good in the world.”

Britain has pledged to share 100 million shots of the Covid-19 vaccine by the middle of next year through the Covax program — which aims to ensure that the shots are distributed fairly — and directly to individual countries.

Prime Minister Boris Johnson will formally agree on an initial proposal of 817,000 doses for Kenya during a meeting with President Uhuru Kenyatta on Wednesday.

A fundraising summit will be held Thursday in London, with other world leaders as well as representatives of business, charities, education and young people in attendance.

About half of the doses of vaccine donated by AstraZeneca will be shipped to Nairobi this week, Downing Street reported in advance of the meeting.

“As friends and allies, we are sharing doses of vaccine from Britain to support Kenya’s fight against the pandemic,” Johnson added in a statement.

The U.K. commitment stems from G7 promises made at the U.K. summit in June to provide at least a billion doses of vaccine internationally through exchange and funding schemes.

The United States has said it will provide 500 million shots to 92 poorer countries, and members of the European Union have agreed to provide at least 100 million doses by the end of 2021.

Wealthier countries, Britain in particular, have been criticized for not starting to donate to poorer countries that lag far behind in vaccinations.

In Britain, more than 70 percent of adults have been vaccinated, and last week the government lifted all remaining restrictions on daily life in England because of the pandemic.

The daily incidence rates in the U.K. seem to be falling, raising hopes for a strong economic recovery.

On Tuesday, the International Monetary Fund made a forecast that the U.K. economy would grow seven percent this year, the fastest among all G-7 countries along with the U.S.

But the IMF also warned that the uneven distribution of vaccines increases inequality as rich countries pick up speed and leave developing countries behind.

The Commonwealth of 54, whose members include Kenya, Jamaica and Malaysia, has called for accelerated vaccine distribution in small nations and warned of the economic impact of the virus in the Caribbean, Pacific and Indian Ocean countries.

Last week, the organization said member nations lost up to $345 billion in trade last year as the pandemic caused a global economic slowdown.