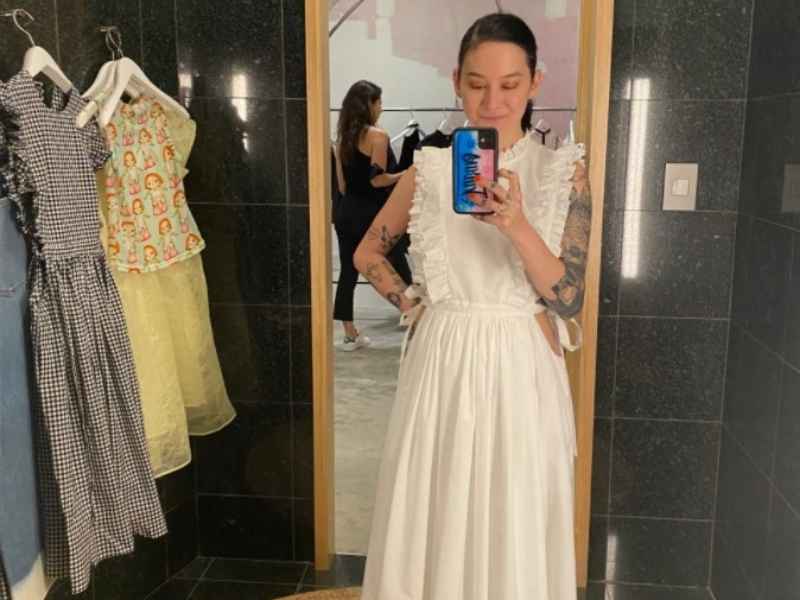 Welcome to “Shopping with Vogue,” a series in which we review a fashion lover’s favorite store. In this issue, we shop with musician and author Michelle Zauner of Japanese Breakfast at Sandy Liang.

I listen to Japanese Breakfast while riding my electric Citi Bike from Brooklyn to meet up in downtown Manhattan with none other than Michelle Zauner of Japanese Breakfast. The song “Savage Good Boy” from her third album Jubilee is one of my favorites. Like every Zauner song, it ignites a longing I haven’t known existed since my first high school crush. In the accompanying clip, she plays cards, watches TV, dines with Michael Imperioli, the silver fox of the Sopranos series, plays the mandolin while wearing delightfully baroque and rich ensembles by Gucci, Vaquera, Area, Puppets and Puppets and Patou. She is absolutely regal.

On top of everything else, Zauner is a writer. She wrote the essay “Crying in H Mart” for The New Yorker about her mother’s death and her Korean heritage. After that essay went viral, she published a memoir of the same title in April. And that’s all on top of the fact that she plays guitar, released the album Jubilee in early June and went on tour in late July. Zauner is truly the tattooed, relaxed renaissance woman of our generation, with an ornate, dreamy stage style.

For shopping, Zauner chose Sandy Liang at 28 Orchard Street, next to Scarr’s Pizza and the Larrie Gallery. It’s a hot spot for dirty skaters and literati in loafers. Zauner moved to New York relatively recently and is still exploring the city. When I meet her, she greets me in a puffy Cecilie Bahnsen dress, Sandy Liang earrings, a Sisterfriend rice necklace and Vans sneakers. She looks like a slice of lemon cake, standing out to her clients.

But being such a bold woman wasn’t always her style. Zauner has come a long way in her formative years in the fashion world. A native of Eugene, Oregon, she started playing in bands in the Philadelphia music scene while studying at Bryn Mawr in 2005 until she achieved success with her own band in 2016. In the past, she has dressed in more masculine clothes, such as superhero t-shirts for boys from Target and vintage grandpa buttons from Goodwill. “For a long time, playing in a band, I wanted to look more masculine because I felt like I had to do it to be taken seriously as a performer and in the industry in general,” she says. “I used to have to prove to everyone that I could carry an 80-pound amp.”

As she became musically independent, her look changed as well. Zauner’s signature look is dressy and punk, a layered dress paired with combat boots or Vans. “I don’t think anyone doubts that I can play guitar or lead a band. I can wear a dress and boots now, and that combination makes me very happy. I don’t feel like I have to prove myself the same way, and it’s really liberating.”

For her performance at Jimmy Kimmel Live! in early July, she wore an ivory Simone Rocha baroque dress with a ruffle collar to perform “Paprika.” The royal rock look was created by Cece Liu, whom Zauner met on the Philadelphia music scene and has been working with for about three years. At the time, Liu wasn’t styling talent – she mostly worked in editorial and advertising – and Zauner wasn’t working with a stylist. “We both learned on the fly,” Liu writes. “Since then, she has really appreciated fashion and found her own style.” Brands took notice of her, too. “In the beginning, no one wanted to lend to us,” says Zauner. The fact that she can now count Rodarte and Rocha as her big supporters is a testament to her growing popularity. “She seems to get more creative the more we work together. At our first fitting, she said: “These images seem so crazy! I’m not sure,'” Liu writes. “Now she says, ‘Maybe we should do something crazier.

At Sandy Liang, Zauner takes a more relaxed route, trying on Mott’s dress from Liang. She cites Kate Bush, Bjork and Karen O of the band Yeah Yeah Yeahs as her inspirations. But her late mother was one of her biggest influences and is the subject of much of Zauner’s material. “She was a very strong advocate of dressing in a way that felt good, not for other people, which is probably elementary, but from a very young age that was something she instilled in me,” says Zauner. She still has her mother’s Chanel bag. “I had a very fashionable mom, and I was such a tomboy. In my book, I talk about how my mom and many Koreans love designer bags and finding great deals,” she says. “She always dreamed of having a real Chanel bag, and at age 50 she finally bought one. I inherited it after she died, but I never took it out of the box because I’m such a reckless tomboy, I’m afraid I’ll ruin it.”

By the end of our visit to Sandy Liang, Zauner had tried on half the store. We’re still discussing what to take when stylist Miyako Bellizzi, responsible for the sleek and sassy looks at Uncut Gems, walks in with manicurist Holly Falcone. I introduce Bellizzi to Zauner as he tries on a pair of fitted high-waisted pants and a white tank top with a cutout on the stomach. Funny, but Bellizzi is dressed about the same. “You look like a celebrity model,” says Zauner Bellizzi. As Zauner walks out of the fitting room, Bellizzi tightens the waistband of Zauner’s pants. (I tell Zauner she’s getting a killer New York stylin’). Zauner looks great, the perfect amount of polish mixed in with all that downtown cool. “You just have to tuck it in an inch here,” Bellizzi advises. “You can take it to the laundromat for $20.” Zauner gets the two items, along with a long-sleeved plaid top with a “Peter Pan” collar called the Stinging Top.

We leave, go to Scarr’s Pizza and talk about everything from hometown friends to women in rock and roll. We talk about the Japanese Breakfast band’s tour, which began July 21 in Maryland and will go all over the United States. Satisfied with her purchases, Zauner takes an Uber back to Brooklyn and I wait for my car at Sandy Liang. I realize that all along, Zauner has had a calm and stunningly dressed groupie, a salesgirl named Ashley. (Zauner and I complimented her Mott’s sundress when we first arrived). In her spare time, she makes alternative indie music for her band Chaarm. For her, meeting Zauner was a monumental moment. “I listen to her every day! It’s important to me to see her on stage because there aren’t many Asian women in rock, so being an Asian woman in music, I felt like I could do it myself,” she says, adding, “I only work Sundays and Tuesdays, so it had to happen.”