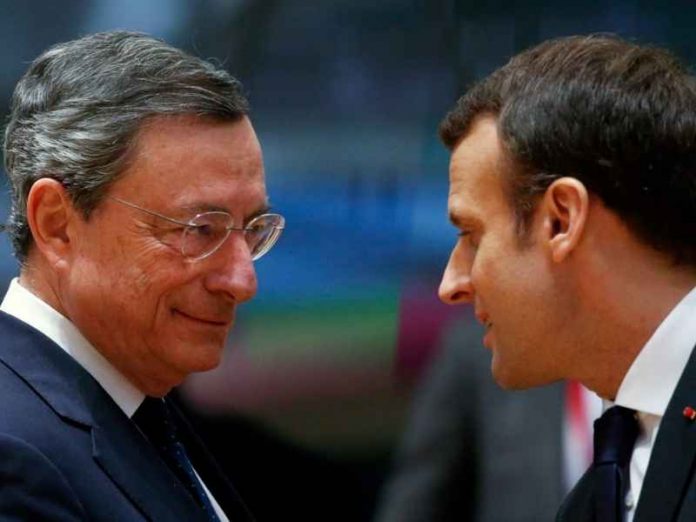 As Germany enters election season, France and Italy (Macron and Draghi) are making a bid for European leadership.

PARIS – A new power couple is vying for leadership in Europe, only this time one half is not German.

As the era of Angela Merkel comes to an end and Germany looks inward ahead of the September elections, Emmanuel Macron and Mario Draghi are stepping forward to fill the void with a new brand of leadership in the EU – one that is faster spending and perhaps faster acting than the Franco-German one before it.

The pair and their allies were already working to put the 750 billion euro EU recovery plan into action. Now they are aiming higher: reforming the bloc’s spending rules, signing a bilateral treaty on the Franco-German model, and joining forces in joint industrial projects and judicial cooperation.

With so much in common, they may even continue to negotiate – at least among themselves.

Both are former investment bankers who see a bolder, faster-moving European Union as an antidote to internal ills. Both hold pro-European, market-oriented views steeped in centrism. And both know that the time to act is now: while Draghi’s stock is high, before Germany gets a new leader and Macron has to fight for reelection.

“There has been a decisive renewal of transalpine relations between Italy and France,” Vincenzo Amendola, Italy’s minister for European affairs, told POLITICO. “With France, we have many points of convergence on social, economic and budgetary issues, as well as on the environment and the digital transition.”

However, there are many obstacles in the way of Franco-Italian domination. The thrifty Nordic states will surely object to further spending and financial integration, and the central and eastern powers will continue to ignore Macron’s socially liberal leadership.

Behind the show of benevolence lies a history of Franco-Italian disagreement. Just two years ago, Franco-Italian diplomatic relations were at a postwar low, according to the French Foreign Ministry, amid disputes over migration, clashing goals in Libya, the Italian foreign minister flirting with the Yellow Vests movement and France withdrawing its ambassador to Rome.

Macron faces an uphill struggle for re-election next year, which will limit him on the European stage just as Germany, under new leadership, is getting back on track.

But at least now that Britain has pulled out of the bloc and Germany is being criticized for its deal with Russia to build the Nord Stream II gas pipeline, the mood is elevated.

The Franco-Italian entente began last summer, when Macron and then-Italian Prime Minister Giuseppe Conte advocated an ambitious post-pandemic economic recovery plan. Since Draghi came to power earlier this year, it has only strengthened.

“There has been a real breakthrough. There is a very close relationship that probably has no historical precedent since 1945,” says Marc Lazare, professor of political history and sociology at Sciences Po Paris.

The newfound enthusiasm between Paris and Rome was demonstrated earlier this month when Italian President Sergio Mattarella visited the French capital as part of his first foreign trip since the blockade.

In a lyrical speech replete with literary references, Macron called Italy “a fraternal country with which France undoubtedly has more common interests than any other.”

Draghi’s arrival only strengthened the relationship. According to Lazar, for Macron, the former head of the European Central Bank and former Goldman Sachs banker is “like-minded and more.”

As the first tentative agreement between Rome and Paris, the two leaders intend to sign a bilateral agreement called the “Treaty of Quirinale,” which in many ways is intended to replicate the Franco-German Elysée Treaty of 1963.

It was first negotiated in 2018, when Paolo Gentiloni was prime minister of Italy, but was postponed a year later by the ruling Five Star and League coalition, and now the issue is back high on the Franco-Italian agenda.

Although the contents of the deal have not been disclosed, people familiar with it say it will allow for closer cross-border cooperation between French and Italian institutions.

“The original idea was to create strengthened and privileged mechanisms for institutional exchanges, as is the case with the Franco-German council of ministers,” said Lia Quartapelle, an Italian parliamentarian in charge of European and foreign affairs in Italy’s center-left Democratic Party. But “as far as I am concerned, we are now moving on to less binding things.”

For Christophe Di Pompeo, a lawmaker from Macron’s party who heads the “Franco-Italian friendship group” in the French National Assembly, the signals the two governments are sending are even more important than the actual provisions of the future treaty. “For me, it is not so much the content as the vector that is important. Once we have an agreement between France and Italy, regardless of its content, we will change the European balance of relations,” he said.

Relations also seem to be warmer on a day-to-day level.

Last spring, France withdrew protection from left-wing Italian terrorists who fled to the country decades ago to avoid imprisonment after refusing to extradite them for decades, a move Macron called a sign of friendship during Mattarella’s visit.

There are also signs of a thaw in industrial issues. While an attempted merger between Italy’s Fincantieri and France’s Chantiers de l’Atlantique ended in failure, earlier this year a deal to create a mega-alliance between automakers Fiat Chrysler and the PSA Group was completed.

The fact that the French management of automaker Stellantis is keeping its investment in Italy and has decided to build a battery plant in Italy could be seen as another sign of warmth.

Another example came last week, when French Economy Minister Bruno Le Maire confirmed that he would involve Italy in Franco-German projects in the space sector.

“Relations with Italy, especially since the state visit of the president of the republic, are regular, ongoing, friendly, and it goes without saying that we want Italy to be part of our agreement on space,” Le Maire said at a joint press conference with his German counterpart in Paris last week.

Yet the forum where the Franco-Italian leadership has the most influence is in the EU.

Paris and Rome are becoming key players in the debate over reforming European rules on public spending, a debate that will heat up in the fall when the European Commission revises spending rules that set budget deficits at 3 percent of economic output and try to limit public debt to 60 percent.

“Both countries share the idea that the fiscal framework is too restrictive,” said Gregory Kleiss, an economist at Bruegel, a Brussels-based think tank. “Draghi and Macron have the same approach” on the issue and “the same diagnosis of fiscal problems.”

In recent months, Le Maire has repeatedly called on the EU to adapt its fiscal rules to the post-pandemic reality, suggesting that jointly backed debt be part of a permanent recovery.

Draghi echoed this call, as did Mattarella during his visit to Paris, where he urged the EU to continue “issuing common debt. In another nod to shared ambition, Mattarella gave a speech on Europe’s future at the Sorbonne – just as Macron did in 2017.

The reform of the Stability and Growth Pact is in the portfolio of the economic commissioner Paolo Gentiloni, the man who boosted Franco-Italian cooperation on the Quirinale Treaty when he was prime minister of Italy.

Kleiss sees a certain continuity between Gentiloni’s approach and that of his predecessor as EU chief, the Frenchman Pierre Moscovici, since they both insisted on a less rigid approach to EU budgetary rules.

Even as it gets closer to Italy, France is not forgetting Germany.

When it comes to reforming budget rules, France is careful not to give the impression that it is calling for looser rules because of its debt. Therefore, it will still seek a Franco-German consensus on this issue as well.

Another example: when France and Germany jointly presented their economic recovery plans in the spring, they invited Italy and Spain to join them a day later to present the plans to Brussels.

“For French diplomats, Germany is always a priority,” Lazar said, hinting at the same time that the situation may change somewhat in the future.

“But in moments of crisis, she remembers that she has a very beautiful lover, Italy,” he added, noting that this Franco-Italian romance could develop into something permanent – “a trilateral relationship with a priority axis with Germany and a more regular dialogue with Italy.”

Some, like Rep. Di Pompeo, believe the Franco-Italian pact could call into question what he called the “German economic model” on which Europe was built and make Europe “more social and more Latin.”

“It is important to create a vector that shows that there is a force against Germany today,” he said.