Home MOVIES HULU Stream It Or Skip It: Endlings On Hulu, A Sci-Fi Series Where... 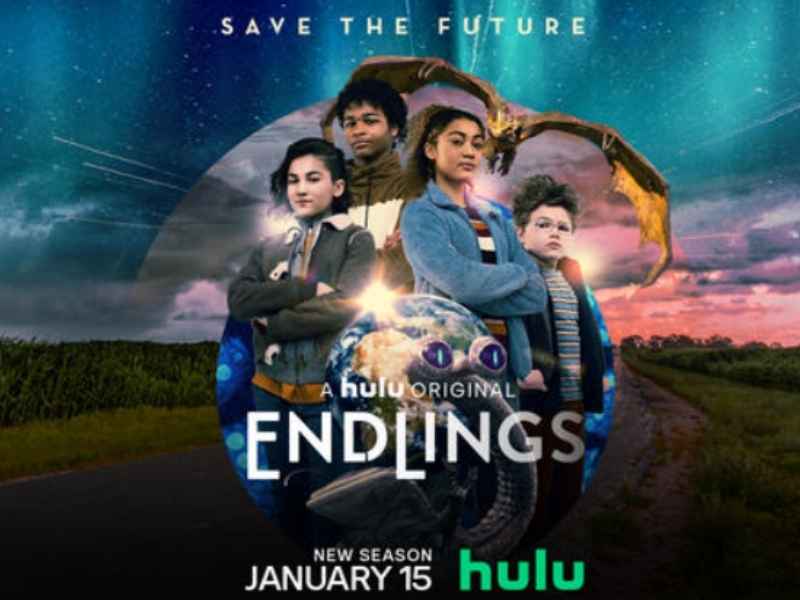 Rarely do scripted dramas aimed at teen and young adult audiences keep in mind that the parents of those kids can watch them, too, and try to keep the series interesting for everyone. Canadian company Sinking Ship Entertainment seems to have that in their DNA; in November, for example, they debuted a very entertaining Ghostwriter reboot on Apple TV+. Now they’re going from ghosts to aliens and endangered species in their new series.

Endlings On Hulu: TO WATCH OR NOT TO WATCH?

Opening shot: On a distant planet with a red sky, a propeller ship lands on the surface. A pilot emerges from it, tracks down his target, a large fly-like creature, and captures it after a lengthy struggle. The pilot then targets his next target: an African elephant.

The gist: In 2040, a woman named Abiona (Oyin Oladejo), studying the two remaining African elephants on the continent, announces to the news media that one of them has died, leaving Toku as the sole surviving member of his species. The last member of the species is known as an “endling,” and there seem to be more and more of them on Earth. Soon after, Abiona sees the same extraterrestrial ship land and capture Toku.

Meanwhile, in Canada, a girl named Julia (Kamaya Fairburn) finds herself in her tenth foster home, from which she is either kicked out for bad behavior or runs away. She has never been a girl who wanted to listen to anyone’s advice, not even her father’s, as we see when he gives her his lucky bait for fishing… Right before he has a heart attack and dies. The police transport her to the farm of Mr. Leopold (Leo Cron), who has taken in three other foster children, and his home seems to be Julia’s last resort before she is sent to juvenile detention. Nevertheless, she runs away from the cops at the first opportunity, and they chase her into a cornfield.

It’s Mr. Leopold’s field, and the drone that just sprayed pesticide on Julia is built by Tabitha – or Tabby (Michela Lucy), as she prefers to call herself – the middle foster child, who is smart but doesn’t want to share her room with anyone else. The eldest, Johnny (Edison Grant), feeds the cow and likes to ride his hoverboard. The youngest, Finn (Cale Ferrin), doesn’t talk much, but he has a heart of gold and is very excited to meet his new foster sister.

Julia shows up at the house and immediately tries to leave. But Mr. Leopold convinces her to stay, but with one caveat: everyone who lives there helps each other. Unbeknownst to everyone, an alien ship falls to Earth, followed by an official (Lisa Ryder). The ship makes a soft crash landing right on Mr. Leopold’s farm. During the fall, the pilot ejects all the capsules with the endlings he captured. As soon as they hit the ground, everyone escapes, including Tuco and that strange fly he caught right before he got the elephant.

Our Opinion: Endlings is a co-production between CBC and Hulu; it premiered in Canada earlier this month. Created by Sinking Ship Entertainment, which has previously produced such series as “Strange Squad” and “Ghost Writer,” the series is aimed at teen audiences. Its tone is generally positive, and even the CGI depicting the aliens and their capture is softened; the aliens are weird rather than scary or creepy.

Aside from the simplistic CGI, there’s nothing special about “Endlings” that screams “CHILDREN SHOW!!!” which is always a good thing. Some of the characters may be a little sloppy, like the always patient Mr. Leopold, but there are familiar childish characters that make them more than just snotty underdogs. In fact, we’re not even sure why Julia has been in so many foster homes; she may be quick with verbal responses, but nothing she has said has been so disgusting as to merit her deliverance.

What is intriguing about Endlings is that it operates on several different levels. One is the theme of family in different forms. It is quite obvious that once these four children realize that an alien has come to save a species that is about to go extinct, they will come together and become a very unusual but warm and loving family. Yes, including the withdrawn Julia, who is the guide through whom the alien initially communicates why he is here. In the second episode, when the children are attacked by the alien fly and they find the ship, the pilot informs Julia through telekinesis that the fly is lost, frightened and upset that she has just lost her child.

Another theme is how this group – along with Abiona, who goes to the farm after the beacon is turned back on on Toku – will help the endling collector save these species, which are about to go extinct. Not all of them will be terrestrial species, but some will be, and will be at the end of the line mostly because of human intervention. So watching everyone cooperate to save these particular species will be interesting.

What age group is it intended for?: Since the movie has some deaths and fights with alien creatures, we would categorize it for an audience of 11 years and older.

Farewell Shot: At the end of the second episode, the kids roll the ET out of the barn to nurse him back to health. Then they see Tuco wandering around the farm. “What’s going on here?” – Mr. Leopold asks. Then the alien’s eyes peek out from under his blanket, and he says, understating the understatement, “Oh, my God.
Sleeping Star: We would watch this show just for Cale Ferrin, who plays Finn. He’s charming, but he also manages to express himself well without saying a word. And his differences only help him as an actor.

The most pilot line: After Julia is caught in the cornfield, the escort woman says, “With an attitude like that, no wonder why nobody wants her.” God, that’s harsh.

Our call: WATCH. Endlings is an enjoyable series that can help your kids learn about why endangered species need to be saved, while at the same time scratching their teeth at science fiction.

Sex toys for couples and the 16 best couples vibrators

The Coyotes Are Getting a Good One in Andre Tourigny in...