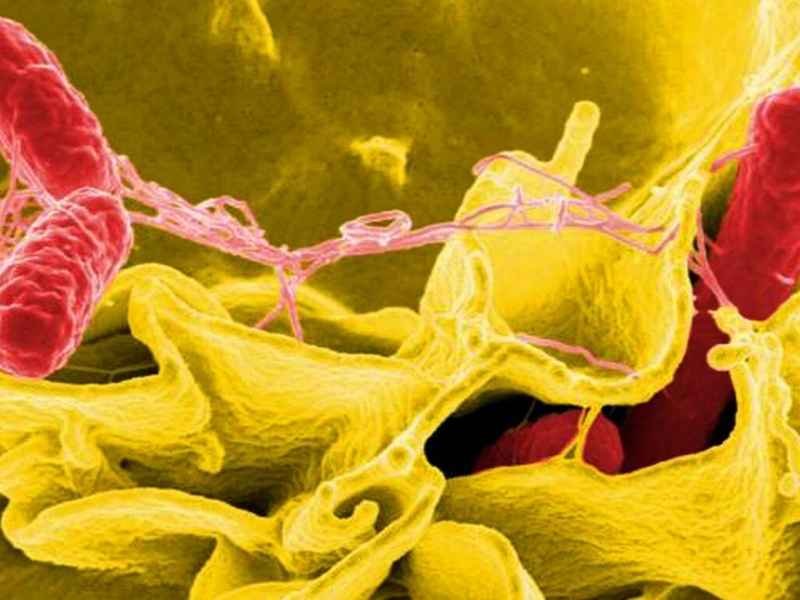 A surprising cellular defense strategy could inspire the creation of new antibiotics.

Salmonella bacteria (red in this color-enhanced micrograph) often infect cells lining the human intestine. The infected cells can fight back by secreting a compound similar to a detergent, which helps dissolve the inner membrane of the salmonella.

When confronted with bacterial invaders, some human cells secrete a surprising substance, soap.

These cells, which are not part of the immune system, secrete a protein similar to a detergent that dissolves pieces of the bacteria’s inner membrane, killing the invaders, researchers report in the July 16 journal Science.

The “professional” players of the immune system, such as antibodies or white blood cells, get a lot of attention, but “all cells are endowed with some ability to fight infection,” says immunologist John McMeeking, a Howard Hughes Medical Institute researcher at Yale University.

In humans, these normal cellular defense mechanisms are often ignored, although they are part of an “ancient and primordial defense system” and can help develop treatments for new infections, McMeeking says.

Often non-immune cells rely on the warning of their professional counterparts to fight infections. Upon detecting foreigners, specialized immune cells release an alarm signal called interferon-gamma. This signal triggers other cells, including the epithelial cells that line the throat and intestines and often target pathogens.

McMeeking and his colleagues looked for a molecular basis for this action by infecting laboratory versions of human epithelial cells with Salmonella bacteria, which can utilize the nutrient-rich interior of the cells. The team then tested more than 19,000 human genes in search of those that provide some protection against infection.

One gene containing instructions for a protein called APOL3 stood out among the others. When this gene was switched off, epithelial cells died from Salmonella infection even if they were prevented by interferon-gamma. By studying APOL3 molecules in action inside host cells using high-powered microscopy, the researchers found that this protein swarmed among the invading bacteria and somehow killed them.

Salmonellae are hardy microbes protected by an outer and inner membrane, which is common to many species of bacteria. This double layer makes these bacteria hard to kill, but further research has shown how APOL3 and another molecule, GBP1, work together to do this. GBP1 somehow weakens the bacterium’s outer membrane, opening the door for APOL3 to deliver its deadly blow to the inner lipid membrane. APOL3 has both water-loving and lipid-loving parts, allowing it to bind to the inner membrane and dissolve it into intracellular fluid, much like soap washes away fat.

“We were a little surprised to find detergent-like activity inside human cells,” says McMeeking, given that such a molecule can dissolve host membranes as well. But the researchers found that APOL3 specifically targets the lipids found in bacteria, and its activity is blocked by cholesterol, a common component of mammalian cell membranes, leaving human tissue unaffected.

“Everything about these findings is just super cool,” said Jessica Brinkworth, an evolutionary immunologist at the University of Illinois at Urbana-Champaign who was not involved in the study. Many infections start in these epithelial cells, she said, and understanding how they resist is critical to developing future treatments.

“A really interesting finding is how APOL3 is able to distinguish between bacterial membranes and host membranes,” she says. That evolution has found such an elegant way to manipulate this powerful tool is “just beautiful”.