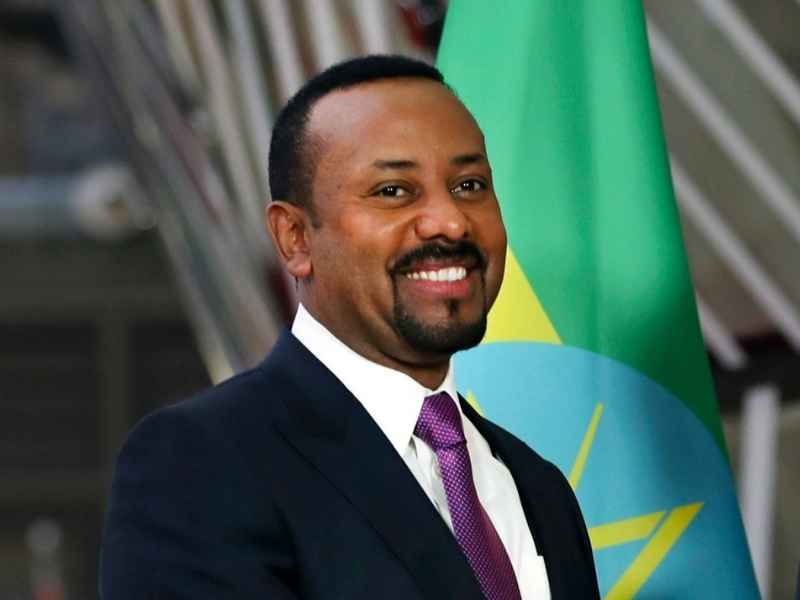 A new five-year term for Ethiopian Prime Minister Abiy Ahmed according to results Saturday from victory in a landmark and twice postponed parliamentary vote, where the country’s ruling Prosperity Party won 410 of 436 seats.

Opposition parties and independent candidates won a small number of seats, according to the data.

The results were reported by the National Electoral Board of Ethiopia (NEBE), which said that 10 constituencies will be re-run.

Ethiopian President Sahle-Work Zewde addresses the crowd during an event in Addis Ababa after the election results were announced.

“Given the instability of the world in some areas, the difficulties in politics, the effects of the Covid-19 pandemic, and the situation in the north of the country, in the Tigray region.

“Even the geographic expanse and the size of our country’s population shows how tremendous the work has been. So the council worked through these difficult situations.”

Prime Minister Abiy Ahmed welcomed the outcome of the election, which he called “historic.”

It was the first time he had appeared before voters since being appointed prime minister in 2018 after several years of anti-government protests.

In a statement on Twitter, Abiy called the election historically inclusive, adding, “Our party is also happy that it was chosen by the will of the people to run the country.”

The 2019 Nobel Peace Prize winner had hoped to present the election victory as a mandate for political and economic reforms and military operations.

The vote was meant to reaffirm a promised democratic revival in Africa’s second most populous country, with Abiy promising a complete reversal of the repression that had marred past election cycles.

The ruling coalition that preceded him won staggering majorities in the 2015 and 2010 elections, which observers said fell short of international standards of fairness.

A more open contest in 2005 brought a big win for the opposition but led to a deadly crackdown on protests over the disputed results.

Although the state-run Ethiopian Human Rights Commission (EHRC) noted “no serious or widespread human rights violations” at polling stations, voting took place in about a fifth of the country’s 547 constituencies because of ethnic violence or logistical problems.

For the remaining constituencies, a second batch of voting is scheduled for Sept. 6.
However, no voting date has been set in Tigray, where eight months of debilitating conflict in Tigray have undermined Abiy’s reputation in the world and raised fears of widespread famine.

The situation in Tigray remains precarious, with analysts warning of the possibility of more fighting, and some world leaders denouncing a “siege” that blocks much-needed aid to a region where hundreds of thousands face starvation.

The World Food Program said Saturday it was sending 50 truckloads of aid to Tigray. It was unclear whether it had arrived.

In some areas where voting did take place, opposition parties complained of an uneven playing field.

In Abiy’s home region of Oromia, Ethiopia’s largest, the two most prominent opposition parties, the Oromo Federalist Congress and the Oromo Liberation Front, refused to participate in the elections entirely, claiming that their candidates had been arrested and their offices vandalized.

The most competitive regions were Amhara, the second largest region of the country, and the capital, Addis Ababa.

Tzadik Domoz, a 34-year-old ethnic Amhara farmer who grows sesame in Humera in western Tigray, which came under Amhara control during the war, said he was thrilled with the election results.

“You can’t find anyone better than the prime minister right now,” he told reporters.

“He is someone who saved Ethiopia from internal and external forces that were trying to destabilize it,” he said, referring to the Tigray People’s Liberation Front and countries putting pressure on Ethiopia over its mega-dam project on the Nile.

The ECHR noted that there had been “wrongful arrests,” voter intimidation, and “harassment” of observers and journalists in some constituencies; it also said it had observed several murders in the days leading up to the Oromia vote.

The need to be heard.

The opposition National Movement for Amhara filed a complaint with the electoral commission over “serious problems” during the vote.

“Many of our observers were beaten and harassed by ruling party militias,” senior party member Dessalegn Chani told reporters.

Addisu Lashiteu of the Brookings Institution in Washington said that even low opposition representation in parliament could prevent future instability.

“People, especially young people, need to be heard, so they should have a voice in the political process,” Addisu said. “Even if they can’t always influence political decisions, the very fact that they are being heard is important.”

Including opposition voices in formal political processes means they are less likely to become “radicalized” or spur a large-scale protest movement, he added.

Tegbaru Yared, a fellow at the Institute for Security Studies, wrote this week that “deep political cleavages” remain in the country.

The Prosperity Party “must focus on stabilizing the country, ending communal conflict, fighting inflation, engaging the opposition and starting an inclusive national dialogue,” Tegbaru wrote. “This can provide it with popular legitimacy.”

How erotica can be good for your mental health