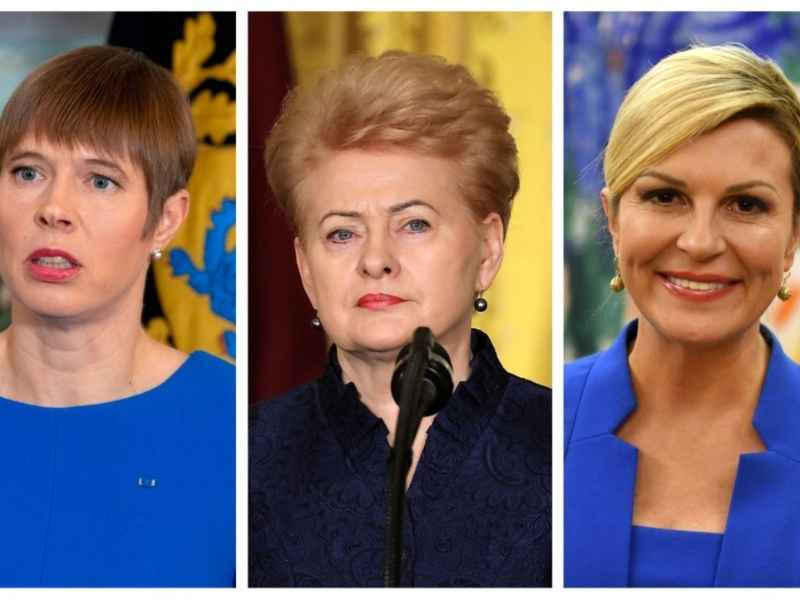 The search for Jens Stoltenberg’s successor as secretary-general focuses on women leaders from Eastern Europe.

NATO allies are scouring their ranks for a successor to Secretary-General Jens Stoltenberg.

Stoltenberg, a former Norwegian prime minister, has held the top civilian post since October 2014. Allies extended his contract until September 2022, leaving just over a year to find a replacement. At headquarters, formal discussions have just begun, and Stoltenberg’s successor is expected to be unveiled at a summit of NATO leaders in Madrid in late spring or early summer next year.

But speculation is already raging in Brussels and other allied capitals: some officials, diplomats, and analysts say that after 72 years, it is high time the alliance appointed the first woman to the highest civilian post. Others say that, given the ongoing confrontation with Russia, the choice of an Eastern European would send an important signal to Moscow.

Grabar-Kitarovic, who was Croatia’s first female president from 2015 to 2020, has the advantage of having already served at NATO headquarters as assistant secretary-general for public diplomacy from 2011 to 2014. In that position, too, she broke the glass ceiling.

Detractors say that Grabar-Kitarovic, who has built her political career as a center-right conservative, has tarnished herself by taking a hard-right position during the failed 2019 presidential re-election campaign.

She shifted to the right under pressure from her populist rival, leading to accusations that she engaged in “dog-whistle” politics, and lost to center-left former prime minister Zoran Milanovic.

However, Grabar-Kitarovic boasts one of the most impressive résumés among potential future NATO heads: She has served as Minister of Europe and Minister of Foreign Affairs of Croatia. She was instrumental in the country’s successful accession to the EU and NATO. She also served as the country’s ambassador to the U.S. from 2008 to 2011, giving her a strong connection in Washington, which will be crucial in deciding on NATO.

As a fellow at the Syne Institute for Politics and Policy at American University this spring, Grabar-Kitarovic led a seminar on the future of NATO, which could well serve as an audition for the top job. During the seminar, she emphasized her time on the ground in Afghanistan during her tenure as assistant secretary-general.

“I enjoyed my work at NATO … and the experience of working together and the atmosphere,” she said at the beginning of the lecture, which also featured former NATO Secretary-General Jaap de Hoop Scheffer, the former Dutch foreign minister who held the alliance’s top post from 2004 to 2009.

De Hoop Scheffer was followed in that post by former Danish Prime Minister Anders Fogh Rasmussen, who preceded Stoltenberg, and some NATO insiders said it was hard to imagine NATO allies choosing someone who had not held a similar position as head of state or government.

This preference for a former national leader has led to recent speculation about former British Prime Minister Theresa May as a potential candidate. Mark Sedwill, who served as cabinet secretary and national security adviser under May and briefly under Prime Minister Boris Johnson, has also been called a potential British candidate for NATO.

One influential former ambassador to NATO said that Britain is generally expected to push hard for the post of secretary-general to demonstrate its continued influence in Europe after Brexit.

But diplomats stressed that qualifications would be considered far more important than nationality, with an emphasis on leadership, management, and communication skills. This could exclude May, whose management and communication skills during Brexit were widely praised at home. Sedwill has never been a foreign minister or defense minister, two positions considered a minimum requirement for any NATO leader.

The U.S., Germany, France and Britain have traditionally been considered the most influential allies in the secretary-general selection process.

But since EU countries make up the vast majority of NATO allies – 21 of the 30 members – and several more countries are considered candidates for EU membership, it may be difficult for Britain to garner support for such an important role after Brexit.

And some EU countries, notably Italy, believe they are in line for NATO’s top post. Federica Mogherini, Italy’s former foreign minister and former EU foreign policy chief, had previously expressed interest, but diplomats said she would not get Washington’s support and that Enrico Letta, who served as Italy’s prime minister from April 2013 to February 2014, was a more viable Italian candidate.

“Britain wants to have a strong backbone in Brussels,” said a former senior NATO official. “The Italians will say it’s their turn – they always say that. And so will the easterners.”

Other Western European officials who could potentially be on the list include Dutch Prime Minister Mark Rutte, who is now working to form a new government coalition, and Belgian Foreign Minister Sophie Wilmes, who previously served as prime minister.

Some NATO observers say the choice of a secretary-general from the Baltic states, particularly Lithuania’s Grybauskaite, could be perceived as too hostile to Moscow at a time when U.S. President Joe Biden is trying to stabilize relations between Russia and the West.

A former senior NATO official said that the competition for secretary-general could only be seen in the context of the broader range of NATO leadership positions that would be up for sale, and the crucial question is how many of those positions Americans would apply for themselves.

Sedwill, for example, might be more likely as deputy secretary-general – which would ensure Britain’s prominence without having to win a popularity contest.

Other factors in the decision are whether the candidate’s home country meets NATO’s goal of spending 2 percent of GDP on defense, a symbolic but important indicator that could boost the chances of Kaljulaid, Estonia’s current president.

Kaljulaid recently ran an unsuccessful campaign for the post of secretary-general of the Organization for Economic Cooperation and Development, a position that seemed to fit her resume much better. Before becoming president in October 2016, she was Estonia’s representative to the EU Court of Auditors for 12 years.

Romania is another NATO ally that meets the 2 percent threshold, potentially giving President Klaus Johannis a shot at the post of secretary general, although Romania may be seen as too hawkish toward Russia.

By contrast, Grabar-Kitarovic has faced questions about being too close to Russian President Vladimir Putin during the 2018 World Cup, when she, wearing a red and white checkered shirt, actively supported the Croatian team that reached the final and lost to France at Moscow’s Luzhniki Stadium.

According to NATO insiders, France will not choose a secretary-general, but will have a de facto veto, effectively nullifying any chance of Turkey claiming the very top post. French President Emmanuel Macron has recently been pushing for NATO to demonstrate greater political cohesion, and Stoltenberg endorsed this goal as part of a recent process of “reflection” on the future of the alliance.

During her seminar at American University, Grabar-Kitarovic demonstrated her ability to repeat Stoltenberg’s pro-NATO platitudes, which have earned him a reputation as a disciplined communicator even amid the turmoil caused by former US President Donald Trump.

“It is very important to note that NATO is not just a military alliance, it is a political alliance as well as an alliance of values,” Grabar-Kitarovic told her audience. “There is a common democratic identity in NATO.”

Facebook’s whistleblower report confirms what researchers have known for years

Here’s Where COVID-19 Cases Are Rising and Falling