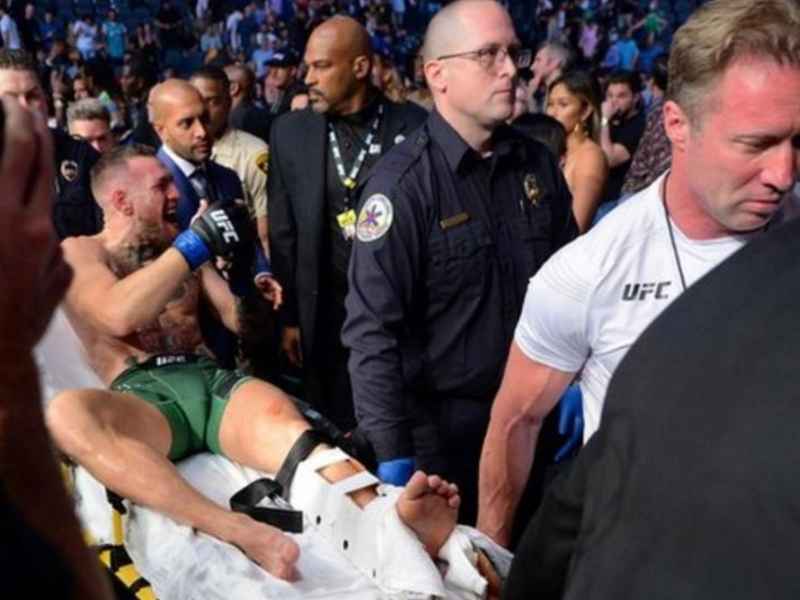 Conor McGregor claims he was already injured before he suffered a broken leg in his fight with Dustin Poirier at UFC 264.

The 33-year-old Irishman claimed he suffered “multiple stress fractures” to his shin above the ankle when he was beaten by the American Poirier in Las Vegas.

McGregor said on Instagram that there had been talk about whether the fight would take place.

He added: “I already have ankle problems.”

Television replays of the fight showed that McGregor rolled his ankle as he stepped back, seconds before the end of the first round, resulting in a fractured lower tibia in his left shin.

The fight was stopped by doctors, and former interim lightweight champion Poirier, 32, won his second straight victory in their trilogy of fights.

McGregor said UFC officials knew about the problem before he entered the octagon last weekend, filming himself on a scooter while recovering from surgery.

“Everybody keeps asking me, at what point did my leg break?” – he said. “Ask [UFC president] Dana White, ask the UFC, ask Dr. [Jeffrey] Davidson, the UFC’s chief medical officer.”

“They knew … I had a stress fracture in my leg going into the cage.”

“There were arguments about taking it out because I was sparring without shin pads and I hit my knee a few times, so I had multiple stress fractures in my shin bone above my ankle.”

McGregor added that training for the lightweight bout was difficult because he kept twisting his ankle.

“I even did a lot of training when my ankle was hurting, I still didn’t stop training,” he said. “I trained on my back, and that’s how I developed those kicks from my back.

“It was a skill I developed because of my injured leg, and I had to adjust my training.”

McGregor, a former world champion in two weight classes, showed in a video that he has a titanium rod inserted in his leg, from knee to ankle.

Once he regained his balance and strength, McGregor joked that he would have an “indestructible” titanium leg, like Arnold Schwarzenegger in “Terminator 2.”