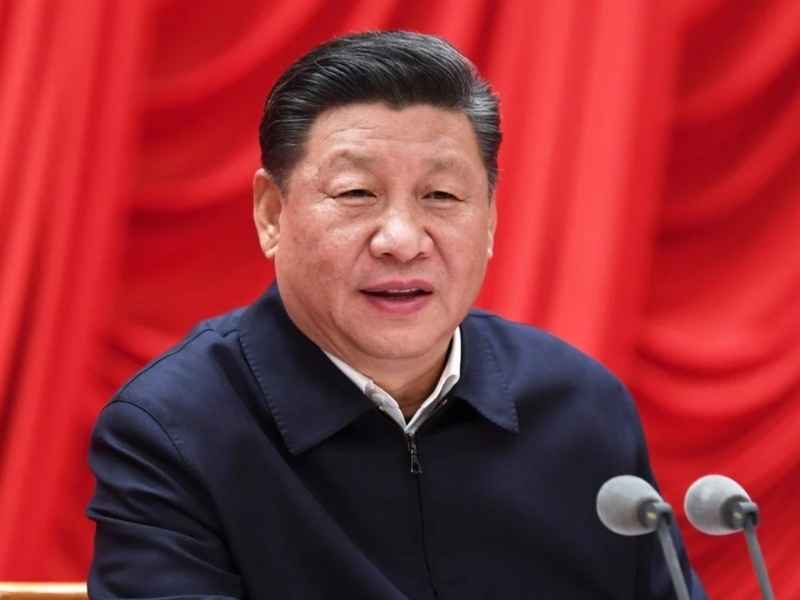 Chinese President Xi Jinping warned that foreign powers would “get hit on the head” if they tried to intimidate or influence the country.

He gave a defiant speech at an event marking the centennial of the ruling Communist Party on Thursday.

Mr. Xi also said that Beijing would not allow “sanctimonious sermons,” in these words, which were widely seen as directed against the United States.

This came at a time when China has been criticized for alleged human rights abuses and suppression of Hong Kong.

Relations between the U.S. and China have recently deteriorated over trade, espionage, and the pandemic.

The Taiwan issue is also a major source of tension. While democratic Taiwan considers itself a sovereign state, Beijing views the island as a breakaway province.

The U.S., under its own laws, is obliged to give Taiwan the means to defend itself if Beijing uses force to retake the island.

“No one should underestimate the determination, will and ability of the Chinese people to defend their national sovereignty and territorial integrity,” he said.

In response, Taiwan said it intends to defend its sovereignty and democracy.

“Beijing must implement democratic reforms such as party competition and respect human rights by behaving as a responsible regional player,” the Taiwan News website quoted the island’s Mainland Affairs Council as saying.

In Beijing’s Tiananmen Square, a carefully vetted crowd was present, many without masks.

In recent weeks, the media in the country have been actively promoting the Party-approved version of Chinese history.

On the same day, Hong Kong also marks the anniversary of the transfer of power.

What stood out in Xi’s message?

Mr. Xi, who spoke for about an hour, reiterated the Party’s role in modern China, saying it was central to the country’s development and that attempts to separate it from the people would fail.

“Only socialism can save China, and only socialism with Chinese characteristics can develop China,” he said, referring to a system in which the party uses markets to reform the economy.

He added that “we will never allow anyone to intimidate, oppress or enslave China.”

“Anyone who dares to try to do so will have his head smashed against the Great Wall of Steel forged by more than 1.4 billion Chinese,” he said.

China has repeatedly accused the U.S. of trying to stifle its growth – and these comments are also seen as an appeal to Washington.

As for Hong Kong and Macau, which, he said, retain a “high degree of autonomy,” they should “precisely comply with the ‘one country, two systems’ principles” that underlie the agreement between Britain and Portugal to return the territories to China.

Xi Jinping, the most influential leader of modern China since Mao Zedong, wore a light gray suit identical to the one worn by the founder of the Communist Party in the famous portrait adorning one side of Tiananmen Square.

Mr. Xi praised his people for the “new world” he said he had created.

He also said that this world could not have arisen without the Party.

At one point, warplanes shaped like the number 100 flew over the crowd, piloted by pilots devoted to the Party and the people.

It’s easy to forget when you live here, but a key part of the Communist Party’s strategy was to try to make the Party, the state apparatus, and the perception of the Chinese nation into one.

They attributed any success, progress, advancement–and economic progress has been phenomenal–to the people and the government, but most of all to the Party.

To make sure the message came through loud and clear, at the end of the ceremony, the gathering sang “Without the Communist Party, there would be no new China.”

How did China prepare for this anniversary?

The Communist Party of China (CPC), founded in 1921, came to power 72 years ago after a long civil war.

In that time, the country has undergone enormous changes – but some of these milestones have been conspicuously missed in the propaganda campaign.

On Monday, an artistic performance called “The Great Journey” was staged at the Bird’s Nest Stadium in Beijing, where artists presented extravagant sets detailing the history of the party and the country.

But major events such as the purges during the Cultural Revolution, the 1989 Tiananmen Square protests and the pro-democracy protests in Hong Kong were missed, the AFP news agency reported.

Since April, Chinese movie theaters have been ordered to show propaganda films, known as “red films,” at least twice a week.

But not everyone was happy with the propaganda.

“Now when I turn on the TV at night, dozens of stations show dramas about the revolutionary wars,” a Beijing resident told the BBC’s China Service.

Surgeon and researcher innovate with mixed reality and AI for safer...

Enola Holmes 2: Netflix Sequel News & What We Know So...

The Best Lubes To Use With Your Favorite Sex Toys